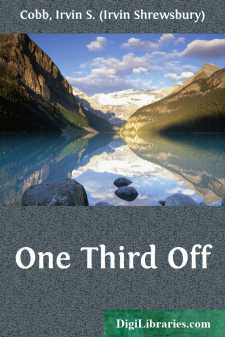 chapter i Extra! Extra! All About The Great Reduction!

The way I look at this thing is this way: If something happens to you and by writing about it you can make a bit of money and at the same time be a benefactor to the race, then why not? Does not the philanthropic aspect of the proposition more than balance off the mercenary side? I hold that it does, or at least that it should, in the estimation of all fair-minded persons. It is to this class that I particularly address myself. Unfair-minded persons are advised to take warning and stop right here with the contemporary paragraph. That which follows in this little volume is not for them.

An even stronger motive impels me. In hereinafter setting forth at length and in detail the steps taken by me in making myself thin, or, let us say, thinner, I am patterning after the tasteful and benevolent examples of some of the most illustrious ex-fat men of letters in our country. Take Samuel G. Blythe now. Mr. Blythe is the present international bant-weight champion. There was a time, though, when he was what the world is pleased to call over-sized. In writing on several occasions, and always entertainingly and helpfully, upon the subject of the methods employed by him to reduce himself to his current proportions I hold that he had the right idea about it.

Getting fat is a fault; except when caused by the disease known as obesity, it is a bad habit. Getting thin and at the same time retaining one's health is a virtue. Never does the reductionist feel quite so virtuous as when for the first time, perhaps in decades, he can stand straight up and look straight down and behold the tips of his toes. His virtue is all the more pleasant to him because it recalls a reformation on his part and because it has called for self-denial. I started to say that it had called for mortification of the flesh, but I shan't. Despite the contrary opinions of the early fathers of the church, I hold that the mortification of the flesh is really based upon the flesh itself, where there is too much of it for beauty and grace, not merely upon the process employed in getting rid of it.

Ask any fat man—or better still, any formerly fat man—if I am not correct. But do not ask a fat woman unless, as in the case of possible fire at a theater, you already have looked about you and chosen the nearest exit. Taken as a sex, women are more likely to be touchy upon this detail where it applies to themselves than men are.

I have a notion that probably the late Lucrezia Borgia did not start feeding her house guests on those deep-dish poison pies with which her name historically is associated until after she grew sensitive about the way folks dropping in at the Borgia home for a visit were sizing up her proportions on the bias, so to speak. And I attribute the development of the less pleasant side of Cleopatra's disposition—keeping asps around the house and stabbing the bearers of unpleasant tidings with daggers and feeding people to the crocodiles and all that sort of thing—to the period when she found her anklets binding uncomfortably and along toward half past ten o'clock of an evening was seized by a well-nigh uncontrollable longing to excuse herself from the company and run upstairs and take off her jeweled stomacher and things and slip into something loose.