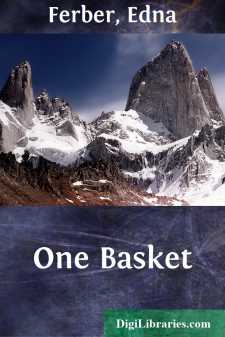 Before she tried to be a good woman she had been a very bad woman—so bad that she could trail her wonderful apparel up and down Main Street, from the Elm Tree Bakery to the railroad tracks, without once having a man doff his hat to her or a woman bow. You passed her on the street with a surreptitious glance, though she was well worth looking at—in her furs and laces and plumes. She had the only full-length mink coat in our town, and Ganz's shoe store sent to Chicago for her shoes. Hers were the miraculously small feet you frequently see in stout women.

Usually she walked alone; but on rare occasions, especially round Christmastime, she might have been seen accompanied by some silent, dull-eyed, stupid-looking girl, who would follow her dumbly in and out of stores, stopping now and then to admire a cheap comb or a chain set with flashy imitation stones—or, queerly enough, a doll with yellow hair and blue eyes and very pink cheeks. But, alone or in company, her appearance in the stores of our town was the signal for a sudden jump in the cost of living. The storekeepers mulcted her; and she knew it and paid in silence, for she was of the class that has no redress. She owned the House with the Closed Shutters, near the freight depot—did Blanche Devine.

In a larger town than ours she would have passed unnoticed. She did not look like a bad woman. Of course she used too much make-up, and as she passed you caught the oversweet breath of a certain heavy scent. Then, too, her diamond eardrops would have made any woman's features look hard; but her plump face, in spite of its heaviness, wore an expression of good-humored intelligence, and her eyeglasses gave her somehow a look of respectability. We do not associate vice with eyeglasses. So in a large city she would have passed for a well-dressed, prosperous, comfortable wife and mother who was in danger of losing her figure from an overabundance of good living; but with us she was a town character, like Old Man Givins, the drunkard, or the weak-minded Binns girl. When she passed the drug-store corner there would be a sniggering among the vacant-eyed loafers idling there, and they would leer at each other and jest in undertones.

So, knowing Blanche Devine as we did, there was something resembling a riot in one of our most respectable neighborhoods when it was learned that she had given up her interest in the house near the freight depot and was going to settle down in the white cottage on the corner and be good. All the husbands in the block, urged on by righteously indignant wives, dropped in on Alderman Mooney after supper to see if the thing could not be stopped. The fourth of the protesting husbands to arrive was the Very Young Husband who lived next door to the corner cottage that Blanche Devine had bought. The Very Young Husband had a Very Young Wife, and they were the joint owners of Snooky. Snooky was three-going-on-four, and looked something like an angel—only healthier and with grimier hands....