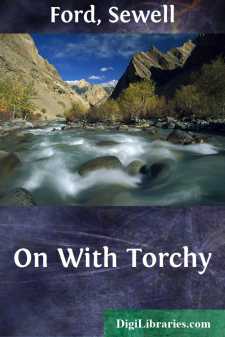 CHAPTER I CHANGING IT FOR VEE

Say, what's next to knowin' when you're well off? Why, thinkin' you are.

Which is a little nugget of wisdom I panned out durin' a chat I had not long ago with Mr. Quinn, that I used to work under when I was on the door of the Sunday sheet, three or four years back.

"Hail, Torchy!" says he, as we meets accidental on Broadway. "Still carrying the burning bush under your hat, aren't you?"

I grins good-natured at his old josh, just as I used to about twice a week regular, and admits that I am.

"Ah!" says he. "I see the brilliance is not all on the outside. Well, what use are you putting it to? Who are you with now?"

"As First, or Second Vice President?" says he, cockin' his head on one side humorous.

"Add 'em together and multiply by three," says I, "then you'll be warm."

"I don't quite get the result," says he.

"Ever hear of an office-boy-de-luxe?" says I. "They don't print it on the letter-heads yet, or paint it on the ground-glass, but that's my real label. I'm the only one in New York, too."

Mr. Quinn chuckles and goes off shakin' his head. I expect he's disappointed that I've stuck so long in one shop without climbin' further up the ladder. That's what he was always preachin' at me, this ladder-climbin' advice. But say, hod carriers do that. Me for an express elevator when the time comes.

But meanwhile, with a couple of bosses like Old Hickory Ellins and Mr. Robert, it ain't so worse sittin' behind the brass rail. That's one reason I ain't changed. Also there's that little mine enterprise me and Mr. Robert's mixed up in, which ain't come to a head yet.

Then—well, then, there's Vee. Go on—hand me the jolly! And if you push me to it I'll admit I ain't any speedy performer at this "Oh, you!" game. Mr. Robert he thinks it's comic, when he has the kiddin' fit on, to remark chuckly, "Oh, I say, Torchy, have you seen Miss Vee lately?"

There's others too, that seems to get a lot of satisfaction shootin' the same thing at me, and they sort of snicker when I get pink in the ears. But, say, there's a heap of difference between pickin' peaches from an easy chair under the tree, and when you have to shin the garden wall and reach through the barbed wire ornament on top.

Course, I ain't comparin' anything—but there's Aunty. Dear old girl! Square as a brick, and about as yieldin'; good as gold too, but worth more per ounce than any coined at the mint; and as foxy in the mind as a corporation lawyer arguin' before the Rapid Transit Commission. Also I'm as welcome to Aunty's eyesight as Eugene V. Debs would be at the Union League Club—just about. That ain't any idle rumor, either, nor something that was hinted to me casual. It's first-hand information, hot off the bat.

"Boy," says she, glarin' at me through her gold lorgnette like I was some kind of insect specimen, "do I understand that you come here to see my niece?"