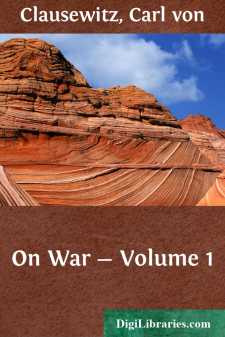 THE Germans interpret their new national colours—black, red, and white—by the saying, "Durch Nacht und Blut zur licht." ("Through night and blood to light"), and no work yet written conveys to the thinker a clearer conception of all that the red streak in their flag stands for than this deep and philosophical analysis of "War" by Clausewitz.

It reveals "War," stripped of all accessories, as the exercise of force for the attainment of a political object, unrestrained by any law save that of expediency, and thus gives the key to the interpretation of German political aims, past, present, and future, which is unconditionally necessary for every student of the modern conditions of Europe. Step by step, every event since Waterloo follows with logical consistency from the teachings of Napoleon, formulated for the first time, some twenty years afterwards, by this remarkable thinker.

What Darwin accomplished for Biology generally Clausewitz did for the Life-History of Nations nearly half a century before him, for both have proved the existence of the same law in each case, viz., "The survival of the fittest"—the "fittest," as Huxley long since pointed out, not being necessarily synonymous with the ethically "best." Neither of these thinkers was concerned with the ethics of the struggle which each studied so exhaustively, but to both men the phase or condition presented itself neither as moral nor immoral, any more than are famine, disease, or other natural phenomena, but as emanating from a force inherent in all living organisms which can only be mastered by understanding its nature. It is in that spirit that, one after the other, all the Nations of the Continent, taught by such drastic lessons as Koniggrätz and Sedan, have accepted the lesson, with the result that to-day Europe is an armed camp, and peace is maintained by the equilibrium of forces, and will continue just as long as this equilibrium exists, and no longer.

Whether this state of equilibrium is in itself a good or desirable thing may be open to argument. I have discussed it at length in my "War and the World's Life"; but I venture to suggest that to no one would a renewal of the era of warfare be a change for the better, as far as existing humanity is concerned. Meanwhile, however, with every year that elapses the forces at present in equilibrium are changing in magnitude—the pressure of populations which have to be fed is rising, and an explosion along the line of least resistance is, sooner or later, inevitable.

As I read the teaching of the recent Hague Conference, no responsible Government on the Continent is anxious to form in themselves that line of least resistance; they know only too well what War would mean; and we alone, absolutely unconscious of the trend of the dominant thought of Europe, are pulling down the dam which may at any moment let in on us the flood of invasion.

Now no responsible man in Europe, perhaps least of all in Germany, thanks us for this voluntary destruction of our defences, for all who are of any importance would very much rather end their days in peace than incur the burden of responsibility which War would entail....