On the Vice of Novel Reading. Being a brief in appeal, pointing out errors of the lower tribunal. 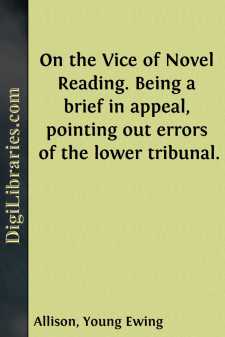 ON THE VICE OF NOVEL READING.

Ever since the Novel reached the stage of development where it was demonstrated to be the most ingenious vehicle yet designed for conveying the protean thought and fancy of man, there has stood in the judgment book of Public Opinion the decree that novel-reading was a vice. Of course, that judgment did not apply exclusively to the reading of novels. It was a sort of supplementary decree in which the name of this new invention was specifically added to the list of moral beguilements against which that judgment had anciently stood. Poetry, the Drama, even the virtuous History, had had their noses disjointed by this tribunal. But their great age and the familiarity of their presence had softened the decree in its enforcement. The Novel was a young offender in aspect (though he had the nature and inheritance of the other three), and was, besides, strong in masculinity and virility. A certain sympathy thus sprung up for the three quaint old ladies, as for old offenders whose persistence had won the wink of toleration. They actually achieved a certain factitious respectability in comparison with the fresher and more active dangers afforded by the Novel. But the Novel was simply a combination of all three, more flexible and adaptable. It, therefore, merely shares in the old judgment directed against everything in literature—and in all the arts—that displays the seductiveness of fancy or taste. The judgments of public opinion have been consistently in the line of distrusting and discrediting everything that appeared to be purely spiritual and intellectual, and that could not at once be organized into a political or religious institution or into a mechanical industry with the prospect of large sales and quick profits.

Novel-reading is a vice, then, under this judgment, just as the reading of all fictions, fancies, inventions, and romances in all their forms, poetic, dramatic, and narrative. And if the reading is a vice the writing of them, in all common sense, can be no less than murder or arson. If it is a vice to devote time to the reading of novels it must be a crime to professionally pander to and profit by the vice. And if all this is true, what a wonderfully attractive corner that must be in Hades where are old Homer and the ever young Aristophanes, Sophocles and Æschylus, Dante, Virgil and Boccaccio, Shakespeare and Moliere, Goethe and Hugo, Balzac and Thackeray, Scott and Dumas, Dickens and that wonderful child of Bohemia, who lately lay down to rest on Vailima mountain. Think of all these marvelous eons of genius gathered together for their meet punishment! In one especially warm corner, perhaps, Lope Felix de Vega, the most incorrigible of all, slowly expiating upon some most ingeniously uncomfortable gridiron the 1,160 volumes of crime and vice that are to be set down against him in the indictment, if it be a true bill. We may wonder whether the unknown authors of "Esther" and "The Song of Songs" and the psychological novel of "Job" are there, too, where they properly belong. It must be a great congress with these chief criminals as the senators and a lower house made up of the most agreeably vicious souls of earth, who, in their sojourn here, yielded for a moment to siren voices. If everything in fiction—from the astonishing conspiracies overthrown by "Old Sleuth" to the magnificent visions that old John Milton saw, of incarnate ambition like a branded criminal driven out before the radiant hosts of heaven—if all the fiction that makes up the spirit of the novel is included in this index expurgatorius of eternity, then we may well have a doubt, my friends, whether hell can hold us all.

It is a curious exercise for persons immersed in writing and study as an occupation, and possessing a catholic tolerance for all occupations, to hark back to the time when they were still within the jurisdiction of the world that acts but does not study. In all the average towns, hamlets and country-sides of the world human nature beats with exactly the same pulse. If a change come, it comes slowly and it changes all together, so that all are still alike. In the small towns novel-reading has been considered about as contemptuously as playing the fiddle, though admitted to be less dangerous than family card-playing. It was estimated that a novel-reader was confirming his indolence, and in danger of coming to the poor-house; a fiddler was prophesied to get into jail for vagrancy or larceny; while a card-player had entered a path that might lead as far as the gallows and comprehend all the crimes. This opinion still largely exists in towns and country-sides. We find it maintaining itself even in large cities, among all sorts of very good people, even among the most exceptional men of business, of the professions and of the pulpits. Novel-reading, as a mental vice, according to this opinion, may be compared with opium-eating as a moral vice. It is thought to enervate and corrupt by means of a luxurious excitement, purely fictitious and temporary.

At an annual meeting of members of the public library of a large city, the librarian read the aggregate number of calls for books of each class during the year. Let us assume that there were calls for 65,000 works of fiction, 5,000 of history and biography, 2,000 of science and philosophy, and, say, 75 of theology....