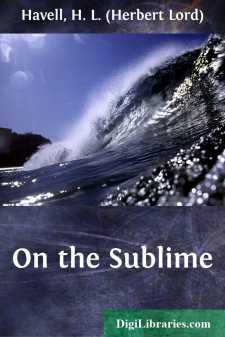 INTRODUCTION TREATISE ON THE SUBLIME

Boileau, in his introduction to his version of the ancient Treatise on the Sublime, says that he is making no valueless present to his age. Not valueless, to a generation which talks much about style and method in literature, should be this new rendering of the noble fragment, long attributed to Longinus, the Greek tutor and political adviser of Zenobia. There is, indeed, a modern English version by Spurden, but that is now rare, and seldom comes into the market. Rare, too, is Vaucher’s critical essay (1854), which is unlucky, as the French and English books both contain valuable disquisitions on the age of the author of the Treatise. This excellent work has had curious fortunes. It is never quoted nor referred to by any extant classical writer, and, among the many books attributed by Suidas to Longinus, it is not mentioned. Decidedly the old world has left no more noble relic of criticism. Yet the date of the book is obscure, and it did not come into the hands of the learned in modern Europe till Robertelli and Manutius each published editions in 1544. From that time the Treatise has often been printed, edited, translated; but opinion still floats undecided about its origin and period. Does it belong to the age of Augustus, or to the age of Aurelian? Is the author the historical Longinus—the friend of Plotinus, the tutor of Porphyry, the victim of Aurelian,—or have we here a work by an unknown hand more than two centuries earlier? Manuscripts and traditions are here of little service. The oldest manuscript, that of Paris, is regarded as the parent of the rest. It is a small quarto of 414 pages, whereof 335 are occupied by the “Problems” of Aristotle. Several leaves have been lost, hence the fragmentary character of the essay. The Paris MS. has an index, first mentioning the “Problems,” and then ΔΙΟΝΥΣΙΟΥ Η ΛΟΓΓΙΝΟΥ ΠΕΡΙ ΥΨΟΥΣ, that is, “The work of Dionysius, or of Longinus, about the Sublime.”

On this showing the transcriber of the MS. considered its authorship dubious. Supposing that the author was Dionysius, which of the many writers of that name was he? Again, if he was Longinus, how far does his work tally with the characteristics ascribed to that late critic, and peculiar to his age?

About this Longinus, while much is written, little is certainly known. Was he a descendant of a freedman of one of the Cassii Longini, or of an eastern family with a mixture of Greek and Roman blood? The author of the Treatise avows himself a Greek, and apologises, as a Greek, for attempting an estimate of Cicero. Longinus himself was the nephew and heir of Fronto, a Syrian rhetorician of Emesa. Whether Longinus was born there or not, and when he was born, are things uncertain. Porphyry, born in 233 A.D., was his pupil: granting that Longinus was twenty years Porphyry’s senior, he must have come into the world about 213 A.D. He travelled much, studied in many cities, and was the friend of the mystic Neoplatonists, Plotinus and Ammonius....