On the Spanish Main Or, Some English forays on the Isthmus of Darien. 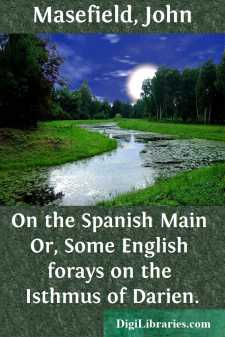 CHAPTER I DRAKE'S VOYAGE TO THE WEST INDIES

Francis Drake, the first Englishman to make himself "redoubtable to the Spaniards" on the Spanish Main, was born near Tavistock about the year 1545. He was sent to sea, as a lad, aboard a Channel coaster engaged in trade with the eastern counties, France and Zeeland. When he was eighteen years of age he joined his cousin, John Hawkins, then a great and wealthy merchant, engaged in the slave trade. Four years later he sailed with Hawkins on a memorable trading voyage to the Spanish Main. On this occasion he commanded a small vessel of fifty tons.

The voyage was unfortunate from the beginning, for the Spaniards had orders from their King to refuse to trade with any foreigners. Before the English could get rid of their freight the ships of their squadron were severely battered by a hurricane, so that they were forced to put into San Juan d'Ulloa, the port of Vera Cruz, to refit. While they lay there a Spanish fleet arrived, carrying a vast quantity of gold and silver for transhipment to Spain. It was not to Hawkins' advantage to allow this Spanish force to enter the haven, for he feared that they would treat him as a pirate if they had an opportunity to do so. However, the Spaniards came to terms with him, an agreement was signed by both parties, and the Spanish ships were allowed into the port. The next day the Spaniards treacherously attacked the English squadron, sank one of the ships at her moorings, killed many of the men, captured a number more, and drove the survivors to sea in Drake's ship the Judith, and a larger ship called the Minion. It was this treacherous attack (and, perhaps, some earlier treachery not recorded) which made Drake an implacable enemy of the Spaniards for the next twenty-eight years.

After the disaster at San Juan d'Ulloa, Drake endeavoured to obtain some recompense for the losses he had sustained. But "finding that no recompence could be recovered out of Spain by any of his own means, or by her Majesties letters; he used such helpes as he might by two severall Voyages into the West Indies." In the first of these two voyages, in 1570, he had two ships, the Dragon and the Swan. In the second, in 1571, he sailed in the Swan without company. The Swan was a small vessel of only five and twenty tons, but she was a "lucky" ship, and an incomparable sailer. We know little of these two voyages, though a Spanish letter (quoted by Mr Corbett) tells us of a Spanish ship he took; and Thomas Moone, Drake's coxswain, speaks of them as having been "rich and gainfull." Probably Drake employed a good deal of his time in preparing for a future raid, for when he ventured out in earnest in 1572 he showed himself singularly well acquainted with the town he attacked. The account from which we take our information expressly states that this is what he did. He went, it says, "to gaine such intelligences as might further him to get some amends for his losse. And having, in those two Voyages, gotten such certaine notice of the persons and places aymed at, as he thought requisite; and thereupon with good deliberation, resolved on a third Voyage, he accordingly prepared his Ships and Company ... as now followes further to be declared."

There can be little doubt that the two tentative voyages were highly profitable, for Drake was able to fit out his third expedition with a care and completeness almost unknown at that time. The ships were "richly furnished, with victuals and apparel for a whole year: and no lesse heedfully provided of all manner of Munition, Artillery, Artificers, stuffe and tooles, that were requisite for such a Man-of-war in such an attempt." He himself, as Admiral of the expedition, commanded the larger ship, the Pascha of Plymouth, of seventy tons. His younger brother, John Drake, sailed as captain of the Swan. In all there were seventy-three men and boys in the expedition; and we read that they were mostly young men—"the eldest ... fifty, all the rest under thirty." They were all volunteers—a fact that shows that Drake had gained a reputation for luck in these adventures. Forty-seven of the seventy-three sailed aboard the Pascha; while the Swan carried the remaining twenty-six, probably with some inconvenience....