On the Portraits of English Authors on Gardening, with Biographical Notices of Them, 2nd edition, with considerable additions 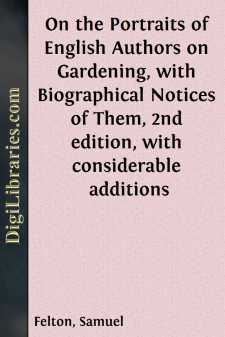 The following pages apply only to those English writers on gardening who are deceased. That there have been portraits taken of some of those sixty-nine English writers, whose names first occur in the following pages, there can be no doubt; and those portraits may yet be with their surviving relatives or descendants. I am not so presumptuous as to apply to the following most slight memorials, some of which relate to very obscure persons, who claimed neither "the boast of heraldry, nor the pomp of power," but whose

benefited society by their honest labour;—I am not so vain as to apply to these, any part of the high testimony which Sir Walter Scott has so justly paid to the merit of Mr. Lodge's truly splendid work of the portraits of celebrated personages of English history. I can only take leave to disjoint, or to dislocate, or copy, a very few of his words, and to apply them to the following scanty pages, as it must be interesting to have exhibited before our eyes our fathers as they lived, accompanied with such memorials of their lives and characters, as enable us to compare their persons and countenances with their sentiments:—portraits shewing us how "our ancestors looked, moved, and dressed,"—as the pen informs us "how they thought, acted, lived and died." One cannot help feeling kindness for the memories of those whose writings have pleased us.

What native of the county of Hereford, but must wish to see their town-hall ornamented with a life-breathing portrait of Dr. Beale, embodying, as it were, in the resemblance of the individual, (to use the words of a most eloquent person on another occasion), "his spirit, his feelings, and his character?" Or what elegant scholar but must wish to view the resemblance of the almost unknown Thomas Whately, Esq., or that of the Rev. William Gilpin, whose vivid pen (like that of the late Sir Uvedale Price), has "realized painting," and enchained his readers to the rich scenes of nature?

Dr. Johnson calls portrait painting "that art which is employed in diffusing friendship, in reviving tenderness, in quickening the affections of the absent, and continuing the presence of the dead."

The horticultural intercourse that now passes between England and France, induces one to express a wish, that the portraits of many of those delightful writers on this science, whose pens have adorned France, (justly termed from its climate la terre classique d'horticulture), were selected and engraved; for many of their portraits have never yet been engraved. If this selection were accompanied with a few brief notices of them and their works, it would induce many in this country to peruse some of the most fascinating productions that ever issued from the press. Amongst so many, whose portraits and memoirs would interest us, I will mention those of Champier, who distinguished himself at the battle of Aignadel, and who published at Lyons, in 1533, Campus Elisius Galliæ amenitate referens; Charles Etienne, who, in 1529, produced his Prædium Rusticum; and who with Leibault published the Maison Rustique, of which upwards of thirty editions have been published, (and which our Gervase Markham calls a work of infinite excellencie); Paulmier de Grenlemesnil, a most estimable man, physician to Charles IX., and who died at Caen in 1588, and wrote a treatise de Vino et Pomaceo; and the only act of whose long life that one regrets is, that his great skill was the means of re-establishing the health of Charles, who, with his mother, directed the horrid Massacre of St....