On the Old Road, Vol. 2 (of 2) A Collection of Miscellaneous Essays and Articles on Art and Literature 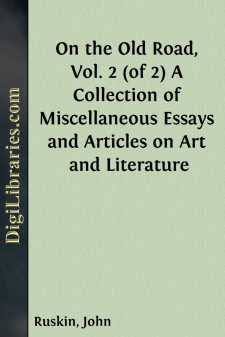 114. Chairman. Has your attention been turned to the desirableness of uniting sculpture with painting under the same roof?—Yes.

What is your opinion on the subject?—I think it almost essential that they should be united, if a National Gallery is to be of service in teaching the course of art.

Sculpture of all kinds, or only ancient sculpture?—Of all kinds.

Do you think that the sculpture in the British Museum should be in the same building with the pictures in the National Gallery, that is to say, making an application of your principle to that particular case?—Yes, certainly; I think so for several reasons—chiefly because I think the taste of the nation can only be rightly directed by having always sculpture and painting visible together. Many of the highest and best points of painting, I think, can only be discerned after some discipline of the eye by sculpture. That is one very essential reason. I think that after looking at sculpture one feels the grace of composition infinitely more, and one also feels how that grace of composition was reached by the painter.

Do you consider that if works of sculpture and works of painting were placed in the same gallery, the same light would be useful for both of them?—I understood your question only to refer to their collection under the same roof. I should be sorry to see them in the same room.

You would not mix them up in the way in which they are mixed up in the Florentine Gallery, for instance?—Not at all. I think, on the contrary, that the one diverts the mind from the other, and that, although the one is an admirable discipline, you should take some time for the examination of sculpture, and pass afterwards into the painting room, and so on. You should not be disturbed while looking at paintings by the whiteness of the sculpture.

You do not then approve, for example, of the way in which the famous room, the Tribune, at Florence, is arranged?—No; I think it is merely arranged for show—for showing how many rich things can be got together.

115. Mr. Cockerell. Then you do not regard sculpture as a proper decorative portion of the National Gallery of Pictures—you do not admit the term decoration?—No; I should not use that term of the sculpture which it was the object of the gallery to exhibit. It might be added, of course, supposing it became a part of the architecture, but not as independent—not as a thing to be contemplated separately in the room, and not as a part of the room. As a part of the room, of course, modern sculpture might be added; but I have never thought that it would be necessary.

You do not consider that sculpture would be a repose after contemplating painting for some time?—I should not feel it so myself.

116. Dean of St. Paul's. When you speak of removing the sculpture of the British Museum, and of uniting it with the pictures of the National Gallery, do you comprehend the whole range of the sculpture in the British Museum, commencing with the Egyptian, and going down through its regular series of gradation to the decline of the art?—Yes, because my great hope respecting the National Gallery is, that it may become a perfectly consecutive chronological arrangement, and it seems to me that it is one of the chief characteristics of a National Gallery that it should be so....