On the Old Road Vol. 1 (of 2) A Collection of Miscellaneous Essays and Articles on Art and Literature 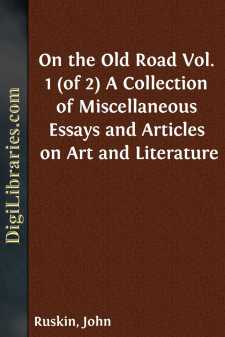 1. In seven days more I shall be fifty-nine;—which (practically) is all the same as sixty; but, being asked by the wife of my dear old friend, W. H. Harrison, to say a few words of our old relations together, I find myself, in spite of all these years, a boy again,—partly in the mere thought of, and renewed sympathy with, the cheerful heart of my old literary master, and partly in instinctive terror lest, wherever he is in celestial circles, he should catch me writing bad grammar, or putting wrong stops, and should set the table turning, or the like. For he was inexorable in such matters, and many a sentence in "Modern Painters," which I had thought quite beautifully turned out after a forenoon's work on it, had to be turned outside-in, after all, and cut into the smallest pieces and sewn up again, because he had found out there wasn't a nominative in it, or a genitive, or a conjunction, or something else indispensable to a sentence's decent existence and position in life. Not a book of mine, for good thirty years, but went, every word of it, under his careful eyes twice over—often also the last revises left to his tender mercy altogether on condition he wouldn't bother me any more.

2. "For good thirty years": that is to say, from my first verse-writing in "Friendship's Offering" at fifteen, to my last orthodox and conservative compositions at forty-five. But when I began to utter radical sentiments, and say things derogatory to the clergy, my old friend got quite restive—absolutely refused sometimes to pass even my most grammatical and punctuated paragraphs, if their contents savored of heresy or revolution; and at last I was obliged to print all my philanthropy and political economy on the sly.

3. The heaven of the literary world through which Mr. Harrison moved in a widely cometary fashion, circling now round one luminary and now submitting to the attraction of another, not without a serenely erubescent luster of his own, differed toto cœlo from the celestial state of authorship by whose courses we have now the felicity of being dazzled and directed. Then, the publications of the months being very nearly concluded in the modest browns of Blackwood and Fraser, and the majesty of the quarterlies being above the range of the properly so-called "public" mind, the simple family circle looked forward with chief complacency to their New Year's gift of the Annual—a delicately printed, lustrously bound, and elaborately illustrated small octavo volume, representing, after its manner, the poetical and artistic inspiration of the age. It is not a little wonderful to me, looking back to those pleasant years and their bestowings, to measure the difficultly imaginable distance between the periodical literature of that day and ours. In a few words, it may be summed by saying that the ancient Annual was written by meekly-minded persons, who felt that they knew nothing about anything, and did not want to know more. Faith in the usually accepted principles of propriety, and confidence in the Funds, the Queen, the English Church, the British Army and the perennial continuance of England, of her Annuals, and of the creation in general, were necessary then for the eligibility, and important elements in the success, of the winter-blowing author....