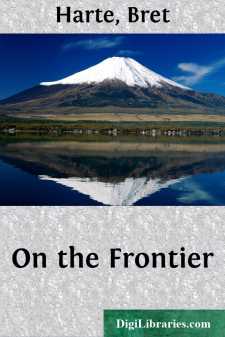 It was noon of the 10th of August, 1838. The monotonous coast line between Monterey and San Diego had set its hard outlines against the steady glare of the Californian sky and the metallic glitter of the Pacific Ocean. The weary succession of rounded, dome-like hills obliterated all sense of distance; the rare whaling vessel or still rarer trader, drifting past, saw no change in these rusty undulations, barren of distinguishing peak or headland, and bald of wooded crest or timbered ravine. The withered ranks of wild oats gave a dull procession of uniform color to the hills, unbroken by any relief of shadow in their smooth, round curves. As far as the eye could reach, sea and shore met in one bleak monotony, flecked by no passing cloud, stirred by no sign of life or motion. Even sound was absent; the Angelus, rung from the invisible Mission tower far inland, was driven back again by the steady northwest trades, that for half the year had swept the coast line and left it abraded of all umbrage and color.

But even this monotony soon gave way to a change and another monotony as uniform and depressing. The western horizon, slowly contracting before a wall of vapor, by four o'clock had become a mere cold, steely strip of sea, into which gradually the northern trend of the coast faded and was lost. As the fog stole with soft step southward, all distance, space, character, and locality again vanished; the hills upon which the sun still shone bore the same monotonous outlines as those just wiped into space. Last of all, before the red sun sank like the descending host, it gleamed upon the sails of a trading vessel close in shore. It was the last object visible. A damp breath breathed upon it, a soft hand passed over the slate, the sharp pencilling of the picture faded and became a confused gray cloud.

The wind and waves, too, went down in the fog; the now invisible and hushed breakers occasionally sent the surf over the sand in a quick whisper, with grave intervals of silence, but with no continuous murmur as before. In a curving bight of the shore the creaking of oars in their rowlocks began to be distinctly heard, but the boat itself, although apparently only its length from the sands, was invisible.

"Steady, now; way enough." The voice came from the sea, and was low, as if unconsciously affected by the fog. "Silence!"

The sound of a keel grating the sand was followed by the order, "Stern all!" from the invisible speaker.

"Shall we beach her?" asked another vague voice.

"Not yet. Hail again, and all together."

There were four voices, but the hail appeared weak and ineffectual, like a cry in a dream, and seemed hardly to reach beyond the surf before it was suffocated in the creeping cloud. A silence followed, but no response.

"It's no use to beach her and go ashore until we find the boat," said the first voice, gravely; "and we'll do that if the current has brought her here. Are you sure you've got the right bearings?"

"As near as a man could off a shore with not a blasted pint to take his bearings by."

There was a long silence again, broken only by the occasional dip of oars, keeping the invisible boat-head to the sea....