On the Firing Line in Education 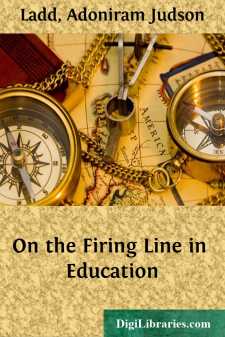 INTRODUCTION HAVE THE SCHOOLS BEEN DISCREDITED BY THE REVELATIONS OF THE WAR? From School and Society, April 5, 1919

Knowing that I was about to publish a book on education in which the Great War, now happily closed, was not taken as the point of departure, a friend said to me one day, in substance, "Aren't you taking undue risks just now in putting out a book on education that isn't based upon a program of reconstruction? Haven't all our so-called educational principles been dis-credited? Shall you get any readers if you do not admit educational failure thus far, and proceed to discuss a change of front, made imperative by recent revelations?" And the editor of a well known educational journal, in asking me for an article, recently, said, among other things, "I should be glad to have an article upon some phase of reconstruction after the war, educational, social, philosophical, as you may like. Here is the next great battlefield of the future, and if the educational forces do not redeem themselves here, it is my opinion that we shall become a greater laughing stock than we have ever been before."

To both of these statements I desire to take exception. To be sure, the war has taught us many lessons bearing upon education; to be sure, it has revealed shortcomings, limitations, and weaknesses. But it seems to me that it has also made clear that we have been working along right lines. Our fundamental educational principles have not been dis-credited. There is no far-reaching educational failure to admit, nor is there any serious shortcoming from which the educational forces of the country have to redeem themselves. "Laughing stock," does the gentleman say? Oh no! Far from it! Let us not get panicky! Some weaknesses brought to light? Certainly. But in the analysis, later to be made, let us see if, for the most part, they do not but demonstrate the soundness of our educational principles and the far-sightedness of our educational leaders together with the short-sightedness of the present critics, in that had suggested recommendations been followed these weaknesses would not have existed. Let us give here but one illustration, and that briefly. We all admit that the medical examinations for the war found too many physical defects, and too many men thereby incapacitated for efficient military service. But would not the results have been very different if, during the last generation, the suggestions and strong recommendations of educators relative to physical education in our schools been acted upon by the public? Ah! The fault was not with educational principles; they were sound. The educational forces of the country knew what was needed, but a parsimonious public would not follow intelligent leadership. We could say, all along the line, "I told you so," if we felt so inclined. Instead of being the "laughing stock" we could—if the matter were not too serious—throw the laugh upon the other fellow. The purpose of our schools has never been to produce soldiers at the drop of the hat, and so they have never been blighted by military training....