On the Choice of Books 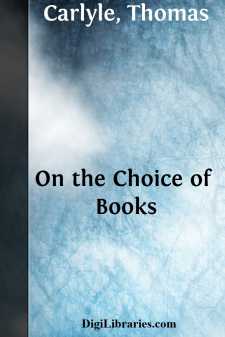 There comes a time in the career of every man of genius who has devoted a long life to the instruction and enlightenment of his fellow-creatures, when he receives before his death all the honours paid by posterity. Thus when a great essayist or historian lives to attain a classic and world-wide fame, his own biography becomes as interesting to the public as those he himself has written, and by which he achieved his laurels.

This is almost always the case when a man of such cosmopolitan celebrity outlives the ordinary allotted period of threescore years and ten; for a younger generation has then sprung up, who only hear of his great fame, and are ignorant of the long and painful steps by which it was achieved. These remarks are peculiarly applicable in regard to the man whose career we are now to dwell on for a short time: his genius was of slow growth and development, and his fame was even more tardy in coming; but since the world some forty years ago fairly recognised him as a great and original thinker and teacher, few men have left so indelible an impress on the public mind, or have influenced to so great a degree the most thoughtful of their contemporaries.

Thomas Carlyle was born on Tuesday, December 4th, 1795, at Ecclefechan, a small village in the district of Annandale, Dumfriesshire. His father, a stone-mason, was noted for quickness of mental perception, and great energy and decision of character; his mother, as affectionate, pious, and more than ordinarily intelligent;[A] and thus accepting his own theory, that "the history of a man's childhood is the description of his parents' environment," Carlyle entered upon the "mystery of life" under happy and enviable circumstances. After preliminary instruction, first at the parish school, and afterwards at Annan, he went, in November, 1809, and when he was fourteen years old, to the University of Edinburgh. Here he remained till the summer of 1814, distinguishing himself by his devotion to mathematical studies then taught there by Professor Leslie. As a student, he was irregular in his application, but when he did set to work, it was with his whole energy. He appears to have been a great reader of general literature at this time, and the stories that are told of the books that he got through are scarcely to be credited. In the summer of 1814, on the resignation of Mr. Waugh, Carlyle obtained, by competitive examination at Dumfries, the post of mathematical master at Annan Academy. Although he had, at his parents' desire, commenced his studies with a view to entering the Scottish Church, the idea of becoming a minister was growingly distasteful to him. A fellow-student describes his habits at this time as lonely and contemplative; and we know from another source that his vacations were principally spent among the hills and by the rivers of his native county. In the summer of 1816 he was promoted to the post of "classical and mathematical master" at the old Burgh or Grammar School at Kirkcaldy. At the new school in that town Edward Irving, whose acquaintance Carlyle first made at Edinburgh, about Christmas, 1815, had been established since the year 1812; they were thus brought closely together, and their intimacy soon ripened into a friendship destined to become famous....