On the Antiquity of the Chemical Art 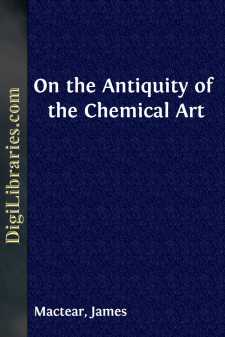 The study of the History of Chemistry as an art, or as a science, is one which possesses peculiar fascination for its votaries. It has been the subject of deep research and much discussion, much has been written upon the subject, and many theories have been broached to account for its origin. We have had laid before us by Professor Ferguson, in his papers on this subject of Chemical History, very clearly and fully the generally-accepted position as regards the origin of the science, and in the last of these papers, entitled “Eleven Centuries of Chemistry,” he deals with the subject in a most complete manner, tracing back through its various mutations the development of the science to the time of Geber, in or about the year A.D. 778.

Of Geber, as a chemist, Professor Ferguson writes, “He was the first—because, although he himself speaks of the ancients, meaning thereby his forerunners, nothing is known of these older chemists.”

Rodwell, in his “Birth of Chemistry,” after a careful examination of the question, comes to the conclusion that, “in spite of all that has been written on the subject, there is no good evidence to prove that alchemy and chemistry did not originate in Arabia not long prior to the eighth century, A.D.,” bringing us again to the times of Geber.

He is not alone in this opinion, and it seems to be generally accepted that chemistry originated in the Arabian schools about this period.

In dealing with the question of the antiquity of chemical art, it has been too much the habit to look at the question with a view of discovering when and who it was that first brought forth, fully clothed as a science, the art of chemistry.

Let us look at the definition of the science given by Boerhæve, about 1732. He describes chemistry as “an art which teaches the manner of performing certain physical operations, whereby bodies cognizable to the senses, or capable of being rendered cognizable, and of being contained in vessels, are so changed by means of proper instruments as to produce certain determinate effects, and at the same time discover the causes thereof, for the service of the various arts.”

Now, it is amply evident that, long before the various known facts could be collected and welded into one compact whole as a science, there must have existed great store of intellectual wealth, as well as mere hereditary practical knowledge of the various chemical facts.

I do not think it will be disputed that, until comparatively recent times, technical knowledge has constantly been in advance of theory, and that it is not too much to conclude that, no matter where we first find actual records of our science, its natal day must have long before dawned. Even in our day, when theoretical science, as applied to chemistry, has made such immense strides, how often do we find that it is only now that theory comes in to explain facts, known as such long previous, and those engaged in practical chemical work know how much technical knowledge is still unwritten, and what may even be called traditionary.

I purpose taking up the subject from this point of view, and attempting, with what little ability I can, to follow back to a still more remote period than that of Geber and the Arabian school of philosophers the traces of what has often been called the divine art.

An aspect of the question that has often presented itself to me is this, that the history of what we call our world extends over some 4000 years before Christ and 1878 years since, so that, according to the usually accepted idea, if chemistry originated in Arabia in the eighth century, it was not known during say the first 5000 years of the world’s history, but has advanced to its present high position amongst the sciences in the last 1000 years....