On Singing and Music

by Society of Friends 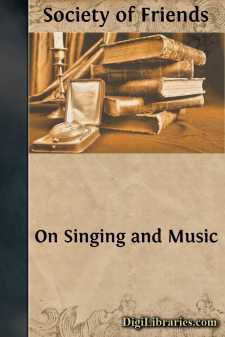 On Singing and Music.

We have been brought under a feeling of religious concern that the ancient testimony of the Society of Friends to the true nature of spiritual worship may be fully maintained by all who claim that name; and that they may be watchful against the introduction of practices which will undermine the support of this testimony, and thus lead those who profess to be the children of the Light, back into a dependence upon forms, out of which their forefathers in the Truth were brought by that remarkable outpouring of grace and spiritual power which marked the rise of Friends as a distinct people.

The fundamental doctrine declared by our Saviour, when He said, “It is the Spirit that quickeneth, the flesh profiteth nothing,” was steadily kept in view by George Fox and his fellow laborers. They clearly saw that Christ had ended the Jewish law, with its outward and ceremonial observances, and had introduced a spiritual dispensation, under which He, by his heavenly and eternal Light or Spirit, was to be the Leader, Guide and Helper of his people; that all was now to be done in and by Him; and that this was especially true of religious worship, which depends upon the enlightening, quickening power of his Holy Spirit.

All confidence in the flesh,—in the natural abilities of man,—was removed; and they were taught to distinguish between that which is of man and that which is of God,—between that stirring up of the natural feelings which can be produced by the skilful use of outward means, such as music, pictorial representations and architectural grace and grandeur; and that solemn covering of the heart which is a fruit and an evidence of the extension of Divine help and power.

Hence these divinely enlightened men and women laid aside the forms in which they had been educated, and which many of them had sincerely and zealously practised, and, in their private retirements before the Lord, and when they assembled for the performance of public worship, they sat in silence before Him, seeking to draw near in spirit, in living exercise of mind, that they might feel the arising of his power, and be enabled to offer acceptable worship.

As that power arose in any, and under its influence, they were led to utter words of prayer or praise to the Almighty, or exhortation to their fellow believers; they were comforted or edified in proportion as they could feel the Spirit bearing witness to the life that accompanied the vocal expressions. Thus their dependence was not placed on man, but on the Spirit that quickeneth.

There was no desire to limit the operation of the Spirit, or to lay down any rule which would prohibit in times of worship any act which truly proceeded from its motions; but there was a jealous care that none of these outward things should be done as formal matters; that people should not look upon them as essential to the holding of meetings for worship, and that they should not in any manner be led away from their dependence on the fresh extension of Divine life and light to their souls, as the very foundation of true worship....