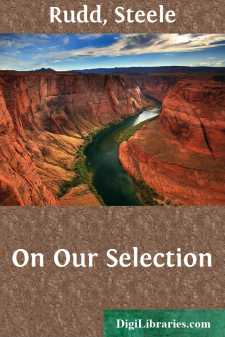 Chapter I. Starting the Selection.

It's twenty years ago now since we settled on the Creek. Twenty years! I remember well the day we came from Stanthorpe, on Jerome's dray—eight of us, and all the things—beds, tubs, a bucket, the two cedar chairs with the pine bottoms and backs that Dad put in them, some pint-pots and old Crib. It was a scorching hot day, too—talk about thirst! At every creek we came to we drank till it stopped running.

Dad did n't travel up with us: he had gone some months before, to put up the house and dig the waterhole. It was a slabbed house, with shingled roof, and space enough for two rooms; but the partition was n't up. The floor was earth; but Dad had a mixture of sand and fresh cow-dung with which he used to keep it level. About once every month he would put it on; and everyone had to keep outside that day till it was dry. There were no locks on the doors: pegs were put in to keep them fast at night; and the slabs were not very close together, for we could easily see through them anybody coming on horseback. Joe and I used to play at counting the stars through the cracks in the roof.

The day after we arrived Dad took Mother and us out to see the paddock and the flat on the other side of the gully that he was going to clear for cultivation. There was no fence round the paddock, but he pointed out on a tree the surveyor's marks, showing the boundary of our ground. It must have been fine land, the way Dad talked about it! There was very valuable timber on it, too, so he said; and he showed us a place, among some rocks on a ridge, where he was sure gold would be found, but we were n't to say anything about it. Joe and I went back that evening and turned over every stone on the ridge, but we did n't find any gold.

No mistake, it was a real wilderness—nothing but trees, "goannas," dead timber, and bears; and the nearest house—Dwyer's—was three miles away. I often wonder how the women stood it the first few years; and I can remember how Mother, when she was alone, used to sit on a log, where the lane is now, and cry for hours. Lonely! It WAS lonely.

Dad soon talked about clearing a couple of acres and putting in corn—all of us did, in fact—till the work commenced. It was a delightful topic before we started,; but in two weeks the clusters of fires that illumined the whooping bush in the night, and the crash upon crash of the big trees as they fell, had lost all their poetry.

We toiled and toiled clearing those four acres, where the haystacks are now standing, till every tree and sapling that had grown there was down. We thought then the worst was over; but how little we knew of clearing land! Dad was never tired of calculating and telling us how much the crop would fetch if the ground could only be got ready in time to put it in; so we laboured the harder.

With our combined male and female forces and the aid of a sapling lever we rolled the thundering big logs together in the face of Hell's own fires; and when there were no logs to roll it was tramp, tramp the day through, gathering armfuls of sticks, while the clothes clung to our backs with a muddy perspiration....