On Heroes and Hero Worship and the Heroic in History 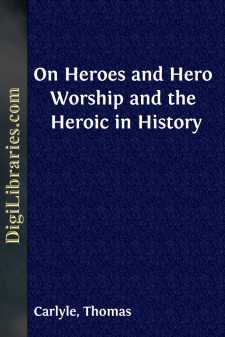 LECTURES ON HEROES. LECTURE I. THE HERO AS DIVINITY. ODIN. PAGANISM: SCANDINAVIAN MYTHOLOGY. [May 5, 1840.]

We have undertaken to discourse here for a little on Great Men, their manner of appearance in our world's business, how they have shaped themselves in the world's history, what ideas men formed of them, what work they did;—on Heroes, namely, and on their reception and performance; what I call Hero-worship and the Heroic in human affairs. Too evidently this is a large topic; deserving quite other treatment than we can expect to give it at present. A large topic; indeed, an illimitable one; wide as Universal History itself. For, as I take it, Universal History, the history of what man has accomplished in this world, is at bottom the History of the Great Men who have worked here. They were the leaders of men, these great ones; the modellers, patterns, and in a wide sense creators, of whatsoever the general mass of men contrived to do or to attain; all things that we see standing accomplished in the world are properly the outer material result, the practical realization and embodiment, of Thoughts that dwelt in the Great Men sent into the world: the soul of the whole world's history, it may justly be considered, were the history of these. Too clearly it is a topic we shall do no justice to in this place!

One comfort is, that Great Men, taken up in any way, are profitable company. We cannot look, however imperfectly, upon a great man, without gaining something by him. He is the living light-fountain, which it is good and pleasant to be near. The light which enlightens, which has enlightened the darkness of the world; and this not as a kindled lamp only, but rather as a natural luminary shining by the gift of Heaven; a flowing light-fountain, as I say, of native original insight, of manhood and heroic nobleness;—in whose radiance all souls feel that it is well with them. On any terms whatsoever, you will not grudge to wander in such neighborhood for a while. These Six classes of Heroes, chosen out of widely distant countries and epochs, and in mere external figure differing altogether, ought, if we look faithfully at them, to illustrate several things for us. Could we see them well, we should get some glimpses into the very marrow of the world's history. How happy, could I but, in any measure, in such times as these, make manifest to you the meanings of Heroism; the divine relation (for I may well call it such) which in all times unites a Great Man to other men; and thus, as it were, not exhaust my subject, but so much as break ground on it! At all events, I must make the attempt.

It is well said, in every sense, that a man's religion is the chief fact with regard to him. A man's, or a nation of men's. By religion I do not mean here the church-creed which he professes, the articles of faith which he will sign and, in words or otherwise, assert; not this wholly, in many cases not this at all. We see men of all kinds of professed creeds attain to almost all degrees of worth or worthlessness under each or any of them....