On Books and the Housing of Them 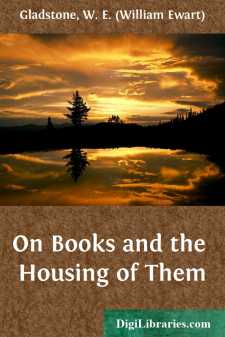 In the old age of his intellect (which at this point seemed to taste a little of decrepitude), Strauss declared that the doctrine of immortality has recently lost the assistance of a passable argument, inasmuch as it has been discovered that the stars are inhabited; for where, he asks, could room now be found for such a multitude of souls? Again, in view of the current estimates of prospective population for this earth, some people have begun to entertain alarm for the probable condition of England (if not Great Britain) when she gets (say) seventy millions that are allotted to her against six or eight hundred millions for the United States. We have heard in some systems of the pressure of population upon food; but the idea of any pressure from any quarter upon space is hardly yet familiar. Still, I suppose that many a reader must have been struck with the naive simplicity of the hyperbole of St. John, perhaps a solitary unit of its kind in the New Testament: "the which if they should be written every one, I suppose that even the world itself could not contain the books that should be written."

A book, even Audubon (I believe the biggest known), is smaller than a man; but, in relation to space, I entertain more proximate apprehension of pressure upon available space from the book population than from the numbers of mankind. We ought to recollect, with more of a realized conception than we commonly attain to, that a book consists, like a man, from whom it draws its lineage, of a body and a soul. They are not always proportionate to each other. Nay, even the different members of the book-body do not sing, but clash, when bindings of a profuse costliness are imposed, as too often happens in the case of Bibles and books of devotion, upon letter-press which is respectable journeyman's work and nothing more. The men of the Renascence had a truer sense of adaptation; the age of jewelled bindings was also the age of illumination and of the beautiful miniatura, which at an earlier stage meant side or margin art, and then, on account of the small portraitures included in it, gradually slid into the modern sense of miniature. There is a caution which we ought to carry with us more and more as we get in view of the coming period of open book trade, and of demand practically boundless. Noble works ought not to be printed in mean and worthless forms, and cheapness ought to be limited by an instinctive sense and law of fitness. The binding of a book is the dress with which it walks out into the world. The paper, type and ink are the body, in which its soul is domiciled. And these three, soul, body, and habilament, are a triad which ought to be adjusted to one another by the laws of harmony and good sense.

Already the increase of books is passing into geometrical progression. And this is not a little remarkable when we bear in mind that in Great Britain, of which I speak, while there is a vast supply of cheap works, what are termed "new publications" issue from the press, for the most part, at prices fabulously high, so that the class of real purchasers has been extirpated, leaving behind as buyers only a few individuals who might almost be counted on the fingers, while the effective circulation depends upon middle-men through the engine of circulating libraries. These are not so much owners as distributers of books, and they mitigate the difficulty of dearness by subdividing the cost, and then selling such copies as are still in decent condition at a large reduction. It is this state of things, due, in my opinion, principally to the present form of the law of copyright, which perhaps may have helped to make way for the satirical (and sometimes untrue) remark that in times of distress or pressure men make their first economies on their charities, and their second on their books.

The annual arrivals at the Bodleian Library are, I believe, some twenty thousand; at the British Museum, forty thousand, sheets of all kinds included. Supposing three-fourths of these to be volumes, of one size or another, and to require on the average an inch of shelf space, the result will be that in every two years nearly a mile of new shelving will be required to meet the wants of a single library....