On Board the Esmeralda Martin Leigh's Log - A Sea Story 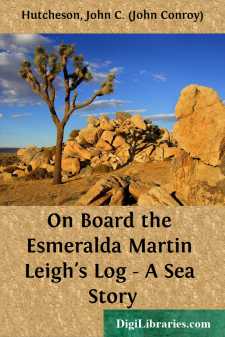 It is strange what trifling events—little things apparently in themselves—seem to have the power of shaping our different destinies, and colouring, so to speak, the whole course of our subsequent life!

To illustrate this, I may state without exaggeration that, had it not been for Dr Hellyer’s hat—taken in connection with the mischievous promptings of that madcap Tom Larkyns, my special chum at the time—it is more than probable that the grand climax which so abruptly brought my school-days to a close might have been averted; and, in that case, following out the argument, I should not have gone to sea; have never started on that disastrous voyage round Cape Horn which nearly terminated my then newly-commenced nautical career as summarily as my whilom academical studies had been put a stop to just previously; and, as a natural consequence, I should most certainly have never had the opportunity or necessity for spinning the present yarn. But, perhaps, the best plan for me to pursue, in order to make you fully understand the matter in all its bearings, will be to “begin at the beginning,” as your regular ’longshore professional storytellers say, in the good old-fashioned way, without any more backing and filling, and veering and hauling, which mode of progression, as every decent sailor knows, only tends to take a craft off her proper true course, and make lots of leeway; whereas, if we sail on free, with a fair wind and a steady helm, you’ll soon be able to follow in my wake and form a correct opinion of your own as to the merits of my logical conclusions.

I will now, therefore, put back again and select a fresh point of departure after this little bit of sea lawyering; so, here goes for a start in earnest!

My name is Martin Leigh, and my mother died shortly after I was born, worse luck for me! My father, who was a lieutenant in the Royal Navy, being within a year or two subsequently killed in action up the Niger river on the west coast of Africa, I was left an orphan at a very early age, without having ever experienced, even in my most remote childish recollections, those two greatest of all blessings—a mother’s love and parental guidance—which many who have been more fortunate than myself to possess are, as I have frequently noticed in after-life, but too often in the habit of undervaluing and making light of.

At the time of my birth, my father was abroad on service in the exercise of his profession, having no private fortune or other resources which would have enabled him to live at home on his half-pay; and on my mother’s early death I was taken charge of at his request by his brother, a man considerably older than himself, with a wife and family of his own. Of course, while my father lived he made over a portion of the honorarium given him by a grateful country in return for exposing his life at the call of duty; but, on his suddenly succumbing to the effects of a murderous slug shot through the lungs, fired from the old flint musket of one of the King of Abarri’s adherents, in the pestilential African stream up which he had gone to demolish a native stronghold that had defied the fetish of the British flag, this allowance for my support ceased, and I was thenceforth left a poor pensioner on my uncle’s bounty....