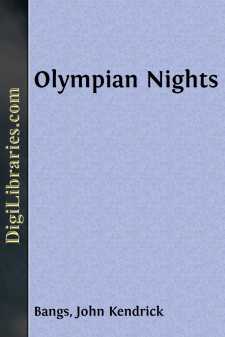 I I Reach Mount Olympus

While travelling through the classic realms of Greece some years ago, sincerely desirous of discovering the lurking-place of a certain war which the newspapers of my own country were describing with some vividness, I chanced upon the base of the far-famed Mount Olympus. Night was coming on apace and I was tired, having been led during the day upon a wild-goose chase by my guide, who had assured me that he had definitely located the scene of hostilities between the Greeks and the Turks. He had promised that for a consideration I should witness a conflict between the contending armies which in its sanguinary aspects should surpass anything the world had yet known. Whether or not it so happened that the armies had been booked for a public exhibition elsewhere, unknown to the talented bandit who was acting as my courier, I am not aware, but, as the event transpired, the search was futile, and another day was wasted. Most annoying, too, was the fact that I dared not manifest the impatience which I naturally felt. I am not remarkable as a specimen of the strong man; quite the reverse indeed, for, while I am by no means a weakling, I am no adept in the fistic art. Hence, when my guide, Hippopopolis by name, as the sun sank behind the western hills, informed me that I was again to be disappointed, the fact that he stands six feet two in his stockings, when he wears them, and has a pleasing way of bending crowbars as a pastime, led me to conceal the irritation which I felt.

"It's all right, Hippopopolis," I said, swallowing my wrath. "It's all right. We've had a good bit of exercise, anyhow, and that, after all, is the chief desideratum to a man of a sedentary occupation. How many miles have we walked?"

"Oh, about forty-three," he said, calmly. "A short distance, your Excellency."

"Very—very short," said I, rubbing my aching calves. "In my own country I make a practice of walking at least a hundred every day. It's quite a pleasing stroll from my home in New York over to Philadelphia and back. I hope I shall be able to show it you some day."

"It will be altogether charming, Excellency," said he. "Shall we—ah—walk back to Athens now, or would you prefer to rest here for the night?"

"I—I guess I'll stay here, Hippopopolis," I replied. "This seems to be a very comfortable sort of a mountain in front of us, and the air is soft. Suppose we rest in the soothing shade for the night? It would be quite an adventure."

"As your Excellency wishes," he replied, tossing a bowlder into the air and catching it with ease as it came down. "It is not often done, but it is for you to say."

"What mountain is it, Hippopopolis?" I asked, turning and gazing at the eminence before us.

"It is Mount Olympus," he answered.

"The very same, your Excellency," he acquiesced. "At least, that is the report. It is commonly stated hereabouts that the god-trust has its headquarters here. As for myself, I have explored its every nook and cranny, but I never saw any gods on it. It's my private opinion that they've moved away; though there be those who claim that it is still occupied by the former rulers of destiny living incog. like other well-born rogues who desire to avoid notoriety."

Hippopopolis is a decided democrat in his views, and has less respect for the King than he has for the peasant.

"I shouldn't call them rogues exactly," I ventured. "Some of 'em were a pretty respectable lot....