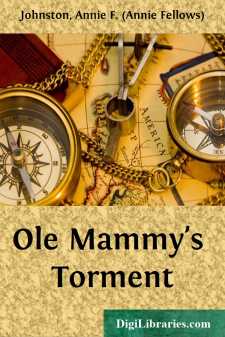 Uncle Billy rested his axe on the log he was chopping, and turned his grizzly old head to one side, listening intently. A confusion of sounds came from the little cabin across the road. It was a dilapidated negro cabin, with its roof awry and the weather-boarding off in great patches; still, it was a place of interest to Uncle Billy. His sister lived there with three orphan grandchildren.

Leaning heavily on his axe-handle, he thrust out his under lip, and rolled his eyes in the direction of the uproar. A broad grin spread over his wrinkled black face as he heard the rapid spank of a shingle, the scolding tones of an angry voice, and a prolonged howl.

"John Jay an' he gran'mammy 'peah to be havin' a right sma't difference of opinion togethah this mawnin'," he chuckled.

He shaded his eyes with his stiff, crooked fingers for a better view. A pair of nimble black legs skipped back and forth across the open doorway, in a vain attempt to dodge the descending shingle, while a clatter of falling tinware followed old Mammy's portly figure, as she made awkward but surprising turns in her wrathful circuit of the crowded room.

Then there was a sudden dash for the cabin door, and an eight-year-old colored boy scurried down the path like a little wild rabbit, as fast as his bare feet could carry him. The noise ended as suddenly as it had begun; so suddenly, indeed, that the silence seemed intense, although the air was full of all the low twitterings and soft spring sounds that come with the early days of April.

Uncle Billy stood chuckling over the boy's escape. The situation had been made clear to him by the angry exclamations he had just overheard. John Jay, left in charge of the weekly washing, flapping on the line, had been unfaithful to his trust. A neighbor's goat had taken advantage of his absence to chew up a pillowcase and two aprons.

Really, the child was not so much to blame. It was the fault of the fish-pond, sparkling below the hill. But old Mammy couldn't understand that. She had never been a boy, with the water tempting her to come and angle for its shining minnows; with the budding willows beckoning her, and the warm winds luring her on. But Uncle Billy understood, and felt with a sympathetic tingle in every rheumatic old joint, that it was a temptation beyond the strength of any boy living to resist.

His chuckling suddenly stopped as the old woman appeared in the doorway. He fell to chopping again with such vigor that the chips flew wildly in all directions. He knew from the way that her broad feet slapped along the beaten path that she was still angry, and he thought it safest to take no notice of her, beyond a cheery "Good mawnin', sis' Sheba."

"Huh! Not much good about it that I can see!" was her gloomy reply. Lowering the basket she carried from her head to a fence-post, she began the story of her grievances. It was an old story to Uncle Billy, somewhat on the order of "The house that Jack built;" for, after telling John Jay's latest pranks, she always repeated the long line of misdeeds of which he had been guilty since the first day he had found a home under her sagging rooftree.

Usually she found a sympathetic listener in Uncle Billy, but this morning the only comfort he offered was an old plantation proverb, spoken with brotherly frankness.

"Well, sis' Sheba, I 'low it'll be good for you in the long run. 'Troubles is seasonin'. 'Simmons ain't good twel dey er fros'bit,' you know."

He stole a sidelong glance at her from under his bushy eyebrows, to see the effect of his remark....