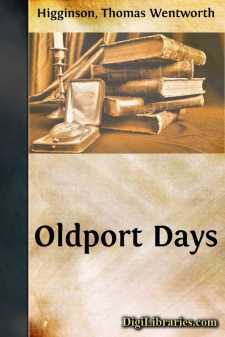 Our August life rushes by, in Oldport, as if we were all shot from the mouth of a cannon, and were endeavoring to exchange visiting-cards on the way. But in September, when the great hotels are closed, and the bronze dogs that guarded the portals of the Ocean House are collected sadly in the music pavilion, nose to nose; when the last four-in-hand has departed, and a man may drive a solitary horse on the avenue without a pang,—then we know that "the season" is over. Winter is yet several months away,—months of the most delicious autumn weather that the American climate holds. But to the human bird of passage all that is not summer is winter; and those who seek Oldport most eagerly for two months are often those who regard it as uninhabitable for the other ten.

The Persian poet Saadi says that in a certain region of Armenia, where he travelled, people never died the natural death. But once a year they met on a certain plain, and occupied themselves with recreation, in the midst of which individuals of every rank and age would suddenly stop, make a reverence to the west, and, setting out at full speed toward that part of the desert, be seen no more. It is quite in this fashion that guests disappear from Oldport when the season ends. They also are apt to go toward the west, but by steamboat. It is pathetic, on occasion of each annual bereavement, to observe the wonted looks and language of despair among those who linger behind; and it needs some fortitude to think of spending the winter near such a Wharf of Sighs.

But we console ourselves. Each season brings its own attractions. In summer one may relish what is new in Oldport, as the liveries, the incomes, the manners. There is often a delicious freshness about these exhibitions; it is a pleasure to see some opulent citizen in his first kid gloves. His new-born splendor stands in such brilliant relief against the confirmed respectability of the "Old Stone Mill," the only thing on the Atlantic shore which has had time to forget its birthday! But in winter the Old Mill gives the tone to the society around it; we then bethink ourselves of the crown upon our Trinity Church steeple, and resolve that the courtesies of a bygone age shall yet linger here. Is there any other place in America where gentlemen still take off their hats to one another on the public promenade? The hat is here what it still is in Southern Europe,—the lineal successor of the sword as the mark of a gentleman. It is noticed that, in going from Oldport to New York or Boston, one is liable to be betrayed by an over-flourish of the hat, as is an Arkansas man by a display of the bowie-knife.

Winter also imparts to these spacious estates a dignity that is sometimes wanting in summer. I like to stroll over them during this epoch of desertion, just as once, when I happened to hold the keys of a church, it seemed pleasant to sit, on a week-day, among its empty pews. The silent walls appeared to hold the pure essence of the prayers of a generation, while the routine and the ennui had vanished all away....