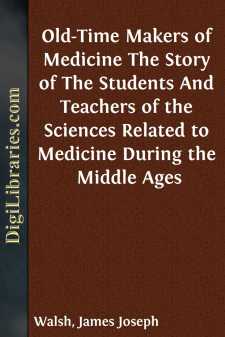 Under the term Old-Time Medicine most people probably think at once of Greek medicine, since that developed in what we have called ancient history, and is farthest away from us in date. As a matter of fact, however, much more is known about Greek medical writers than those of any other period except the last century or two. Our histories of medicine discuss Greek medicine at considerable length and practically all of the great makers of medicine in subsequent generations have been influenced by the Greeks. Greek physicians whose works have come down to us seem nearer to us than the medical writers of any but the last few centuries. As a consequence we know and appreciate very well as a rule how much Greek medicine accomplished, but in our admiration for the diligent observation and breadth of view of the Greeks, we are sometimes prone to think that most of the intervening generations down to comparatively recent times made very little progress and, indeed, scarcely retained what the Greeks had done. The Romans certainly justify this assumption of non-accomplishment in medicine, but then in everything intellectual Rome was never much better than a weak copy of Greek thought. In science the Romans did nothing at all worth while talking about. All their medicine they borrowed from the Greeks, adding nothing of their own. What food for thought there is in the fact, that in spite of all Rome's material greatness and wide empire, her world dominance and vaunted prosperity, we have not a single great original scientific thought from a Roman.

Though so much nearer in time medieval medicine seems much farther away from us than is Greek medicine. Most of us are quite sure that the impression of distance is due to its almost total lack of significance. It is with the idea of showing that the medieval generations, as far as was possible in their conditions, not only preserved the old Greek medicine for us in spite of the most untoward circumstances, but also tried to do whatever they could for its development, and actually did much more than is usually thought, that this story of "Old-Time Makers of Medicine" is written. It represents a period—that of the Middle Ages—that is, or was until recently, probably more misunderstood than any other in human history. The purpose of the book is to show at least the important headlands that lie along the stream of medical thought during the somewhat more than a thousand years from the fall of the Roman Empire under Augustulus (476) until the discovery of America. After that comes modern medicine, for with the sixteenth century the names and achievements of the workers in medicine are familiar—Paracelsus, Vesalius, Columbus, Servetus, Cæsalpinus, Eustachius, Varolius, Sylvius are men whose names are attached to great discoveries with which even those who are without any pretence to knowledge of medical history are not unacquainted. In spite of nearly four centuries of distance in time these men seem very close to us. Their lives will be reserved for a subsequent volume, "Our Forefathers in Medicine."

It is usually the custom to contemn the Middle Ages for their lack of interest in culture, in education, in literature, in a word, in intellectual accomplishment of any and every kind, but especially in science. There is no doubt about the occurrence of marked decadence in the intellectual life of the first half of this period. This has sometimes been attributed to what has been called the inhibitory effect of Christianity on worldly interests. Religion is said to have occupied people so much with thoughts of the other world that the beauties and wonders, as well as much of the significance, of the world around them were missed. Those who talk thus, however, forget entirely the circumstances which brought about the serious decadence of interest in culture and science at this time. The Roman Empire had been the guardian of letters and education and science. While the Romans were not original in themselves, at least they had shown intense interest in what was accomplished by the Greeks and their imitation had often risen to heights that made them worthy of consideration for themselves. They were liberal patrons of Greek art and of Greek literature, and did not neglect Greek science and Greek medicine....