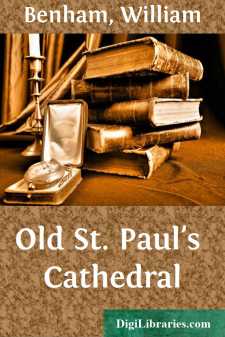 CHAPTER I. THE BUILDING.

The Romans began the systematic conquest of Britain about the time of Herod Agrippa, whose death is recorded in Acts xii. London was probably a place of some importance in those days, though there is no mention of it in Cæsar's narrative, written some eighty years previously. Dr. Guest brought forward reasons for supposing that at the conquest the General Aulus Plautius chose London as a good spot on which to fortify himself, and that thus a military station was permanently founded on the site of the present cathedral, as being the highest ground. If so, we may call that the beginning of historic London, and the Romans, being still heathen, would, we may be sure, have a temple dedicated to the gods close by. Old tradition has it that the principal temple was dedicated to Diana, and it is no improbable guess that this deity was popular with the incomers, who found wide and well-stocked hunting grounds all round the neighbourhood. Ages afterwards, in the days of Edward III., were found, in the course of some exhumations, vast quantities of bones of cattle and stags' horns, which were assumed to be the remains of sacrifices to the goddess. So they may have been; we have no means of knowing. An altar to Diana was found[page 2] in 1830 in Foster Lane, close by, which is now in the Guildhall Museum.

But not many years can have passed before Christianity had obtained a footing among the Roman people; we know not how. To use Dr. Martineau's expressive similitude, the Faith was blown over the world silently like thistle-seed, and as silently here and there it fell and took root. We know no more who were its first preachers in Rome than we do who they were in Britain. It was in Rome before St. Paul arrived in the city, for he had already written his Epistle to the Romans; but evidently he made great impression on the Prætorian soldiers. And we may be sure that there were many "of this way" in the camp in London by the end of the first century. For the same reason we may take it for granted that there must have been a place of worship, especially as before the Romans left the country Christianity was established as the religion of the Empire. Only two churches of the Roman period in England can now be traced with certainty. Mr. St. John Hope and his fellow-explorers a few years ago unearthed one at Silchester, and the foundations of another may be seen in the churchyard of Lyminge in Kent....