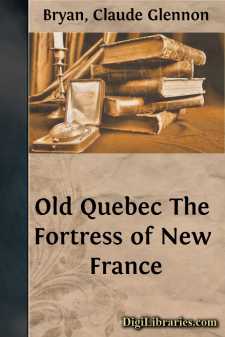 About the walled city of Quebec cling more vivid and enduring memories than belong to any other city of the modern world. Her foundation marked a renaissance of religious zeal in France, and to the people from whom came the pioneers who suffered or were slain for her, she had the glamour of new-born empire, of a conquest renewing the glories of the days of Charlemagne. Visions of a hemisphere controlled from Versailles haunted the days of Francis the First, of the Grand Monarch, of Colbert and of Richelieu, and in the sky of national hope and over all was the Cross whose passion led the Church into the wilderness. The first emblem of sovereignty in the vast domain which Jacques Cartier claimed for Francis his royal master, was a cross whereon was inscribed—

In spite of cruel neglect due to internal troubles and that European strife in which the mother-land was engaged for so many generations, the eyes of Frenchmen turned to their over-sea dominions with imaginative hope, with conviction that the great continent of promise would renew in France the glories that were Greece and the grandeur that was Rome. How hard the patriotic colonists strove to retain those territories which Champlain, La Salle, Maisonneuve, Joliet, and so many others won through nameless toil and martyrdom, and how at last the broad lands passed to another race and another flag, not by fault or folly or lack of courage of the people, but by the criminal corruption of the ruling few, is the narrative which runs through these pages.

For at least the first hundred years of its existence, Quebec was New France; and the story of Quebec in that period is the story of all Canada. The fortress was the heart and soul of French enterprise in the New World. From the Castle of St. Louis, on the summit of Cape Diamond, went forth mandates, heard and obeyed in distant Louisiana. The monastic city on the St. Lawrence was the centre of the web of missions, which slowly spread from the dark Saguenay to Lake Superior. The fearful tragedies of Indian warfare had their birth in the early policy of Quebec. The fearless voyageurs, whose canoes glided into unknown waters, ever westward—towards Cathay, as they believed—made Quebec their base for exploration. And as time went on, the rock-built stronghold of the north became the nerve-centre of that half-century of conflict which left the flag of Britain waving in victory on the Plains of Abraham.

When Montcalm in his last hours consigned to the care of the British conquerors the colonists he had loved and for whom he had fought, he proclaimed a momentous epoch in the world's history—the loss of an Empire to a great nation of Europe and the gain of an Empire to another. Within a generation the Saxon Conquistador was to suffer the same humiliation, and to yield up that colonial territory from which Quebec had been assailed; but the fortress city was always to both nations the keystone of the arch of power on the American continent....