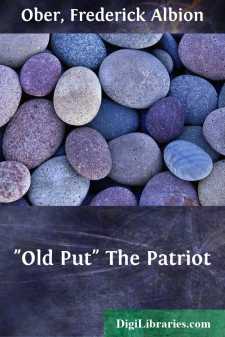 CHAPTER I BIRTHPLACE AND YOUTH

This is the life story of one who was born on a farm, and died on a farm, yet who achieved a world-wide fame through his military exploits. It has been told many times, it will be told for centuries yet to come; for the world loves a man of high emprise, and such was Israel Putnam, the hero of this story.

He was born January 7, 1718, in Danvers, then known as Salem Village, Province of Massachusetts Bay, in New England. His father's Christian name was Joseph, his mother's Elizabeth, and Israel (as he was called at baptism, after his maternal grandfather, Israel Porter) was the great-grandson of his first American ancestor, John Putnam, who had come from England, where the original name of the family was Puttenham. He had settled at Salem more than eighty years before, and his son, Thomas, built, in 1648, the house in which Israel was born in 1718. On the death of Thomas it had become the property of Joseph, who first occupied it in 1690, after his marriage to Elizabeth Porter.

Here the young couple passed through the perilous "witchcraft times," during the worst period of which, in 1692 (it is a tradition in the family), Joseph Putnam kept a loaded musket at his bedside every night and his swiftest horse saddled in the stable, ready for a fight or a flight in case the witch-hunters should come to carry him off to jail. They had accused his sister, who saved her life only by fleeing to the wilderness and remaining in hiding until the insane furor was over. He and his wife survived that gloomy period, and in the ancestral homestead lived happily for more than thirty years, raising a "baker's dozen" of children, of whom Israel was the eleventh.

On both the maternal and paternal side Israel Putnam was descended from a line of sturdy, prosperous farmers. The grandfather whose name he bore had married a daughter of William Hathorne, who came from England and settled in Salem about the year 1630, and who was an ancestor of the famous romancist Nathaniel Hawthorne. John Hathorne, son of William, was a military man and a magistrate. He presided at the infamous witchcraft trials in Salem, and, like the near relatives of Joseph Putnam, looked with severe disfavor upon any one who showed sympathy for the persecuted witches.

Joseph Putnam died in 1723, leaving his widow with eleven surviving children, nine older than Israel, who was then but five years of age, and one, little Mehitable, only three. Several of the older children were already married, and when, in 1727, Mrs. Putnam took a second husband, one Captain Thomas Perley, of Boxford, only the younger members of her family went with her to live in the new home. There Israel resided until he was about eighteen, and Boxford being only a few miles distant from his birthplace, in the same county (Essex), he made frequent visits to the old farm, to which he finally returned as part owner before he attained his majority.

Numerous anecdotes are still related of him in Danvers, all tending to illustrate the early development of those high qualities for which in after-life he became conspicuous....