Old New Zealand: being Incidents of Native Customs and Character in the Old Times

by A Pakeha Maori 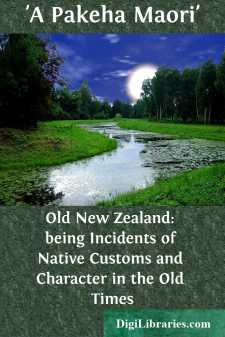 Introductory. — First View of New Zealand. — First Sight of the Natives, and First Sensations experienced by a mere Pakeha. — A Maori Chief's Notions of Trading in the Old Times. — A Dissertation on "Courage." — A few Words on Dress. — The Chief's Soliloquy. — The Maori Cry of Welcome.

Ah! those good old times, when first I came to New Zealand, we shall never see their like again. Since then the world seems to have gone wrong, somehow. A dull sort of world this, now. The very sun does not seem to me to shine as bright as it used. Pigs and potatoes have degenerated; and everything seems "flat, stale, and unprofitable." But those were the times!—the "good old times"—before Governors were invented, and law, and justice, and all that. When every one did as he liked,—except when his neighbours would not let him, (the more shame for them,)—when there were no taxes, or duties, or public works, or public to require them. Who cared then whether he owned a coat?—or believed in shoes or stockings? The men were bigger and stouter in those days; and the women,—ah! Money was useless and might go a-begging. A sovereign was of no use, except to make a hole in and hang it in a child's ear. The few I brought went that way, and I have seen them swapped for shillings, which were thought more becoming.

What cared I? A fish-hook was worth a dozen of them, and I had lots of fish-hooks. Little did I think in those days that I should ever see here towns and villages, banks and insurance offices, prime ministers and bishops; and hear sermons preached, and see men hung, and all the other plagues of civilization. I am a melancholy man. I feel somehow as if I had got older. I am no use in these dull times. I mope about in solitary places, exclaiming often, "Oh! where are those good old times?" and echo, or some young Maori whelp from the Three Kings, answers from behind a bush,—No hea.

I shall not state the year in which I first saw the mountains of New Zealand appear above the sea; there is a false suspicion getting about that I am growing old. This must be looked down, so I will at present avoid dates. I always held a theory that time was of no account in New Zealand, and I do believe I was right up to the time of the arrival of the first Governor. The natives hold this opinion still, especially those who are in debt: so I will just say, it was in the good old times, long ago, that from the deck of a small trading schooner, in which I had taken my passage from somewhere, that I first cast eyes on Maori land. It was Maori land then; but, alas! what is it now? Success to you, O King of Waikato. May your mana never be less;—long may you hold at bay the demon of civilization, though fall at last I fear you must. Plutus with golden hoof is trampling on your land-marks. He mocks the war-song, but should I see your fall, at least one Pakeha Maori shall raise the tangi; and with flint and shell as of old shall the women lament you....