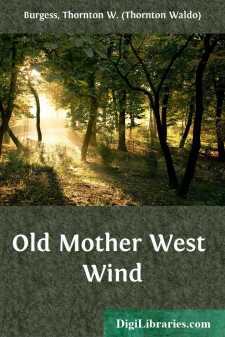 Old Mother West Wind came down from the Purple Hills in the golden light of the early morning. Over her shoulders was slung a bag—a great big bag—and in the bag were all of Old Mother West Wind's children, the Merry Little Breezes.

Old Mother West Wind came down from the Purple Hills to the Green Meadows and as she walked she crooned a song:

When she reached the Green Meadows Old Mother West Wind opened her bag, turned it upside down and shook it. Out tumbled all the Merry Little Breezes and began to spin round and round for very joy, for you see they were to lay in the Green Meadows all day long until Old Mother West Wind should come back at night and take them all to their home behind the Purple Hills.

First they raced over to see Johnny Chuck. They found Johnny Chuck sitting just outside his door eating his breakfast. One, for very mischief, snatched right out of Johnny Chuck's mouth the green leaf of corn he was eating, and ran away with it. Another playfully pulled his whiskers, while a third rumpled up his hair.

Johnny Chuck pretended to be very cross indeed, but really he didn't mind a bit, for Johnny Chuck loved the Merry Little Breezes and played with them everyday.

When the Merry Little Breezes left Johnny Chuck they raced across the Green Meadows to the Smiling Pool to say good morning to Grandfather Frog who sat on a big lily pad watching for green flies for breakfast.

"Chug-arum," said Grandfather Frog, which was his way of saying good morning.

"What is the news, Grandfather Frog?" cried the Merry Little Breezes.

"Mrs. Redwing has a new speckled egg in her nest in the bulrushes," said Grandfather Frog.

"We must see it," cried the Merry Little Breezes, and away they all ran to the swamp where the bulrushes grow.

Now someone else had heard of Mrs. Redwing's dear little nest in the bulrushes, and he had started out bright and early that morning to try and find it, for he wanted to steal the little speckled eggs just because they were pretty. It was Tommy Brown, the farmer's boy.

When the Merry Little Breezes reached the swamp where the bulrushes grow they found poor Mrs. Redwing in great distress. She was afraid that Tommy Brown would find her dear little nest, for he was very, very near it, and his eyes were very, very sharp....