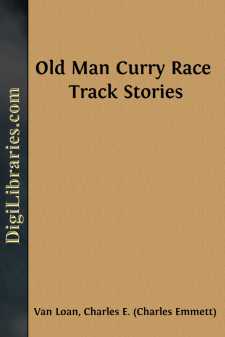 INTRODUCTION BY L. B. YATES

It is one of life's tragedies that as we go along we realize the changes that come upon almost everything with which we used to be associated. And this is noticeable not only in ordinary affairs, whether it be in business or in the home, but it obtrudes itself upon the sports or pastimes which we most affected in the days when some of us had more time or a greater predilection to indulge in them.

We so often go back to an old stamping ground expecting to find old friends or to meet the characters which to a great extent added to the charm of local coloring, and nothing disappoints us more than to find that they have all either gone the way of the earth or changed their manner of living and habitat.

I think this is brought more forcibly to mind when we view the turf activities of an earlier generation as compared with those more modern, because nowadays the game is played differently all around and doesn't look the same from the viewpoint of one who loved the spectacular and quaint figures that so distinguished what we might call the Victorian Era of American racing.

The sport of emperors has to a great extent become the pastime of King Moneybags. And there is no place for ancient crusaders like Old Man Curry, so he has taken the remnants of his stable and gone back to the farm or merged into the humdrum and neutral tinted landscape which always designates the conventional and ordinary.

He doesn't fit in any more. The cost of maintaining a racing stable is almost ten times greater than it was in the days when he and his kind went up and down the country making the great adventure. Racing has been systematized and ticketed and labeled in such a way that it is only very rich men who can afford to indulge in it. The tracks west of Louisville are all closed. The skeleton hand of the gloom distributor has put padlocks on the gates. Even if Old Man Curry was with us to-day, his sphere of action would be limited, unless he elected to play a game where the odds would be so immeasurably against him that he would be beaten long before he started.

So it is that when Charlie Van Loan went away, he bequeathed to us the records of a peculiar nomadic people which are now almost like the argonauts and whose manner of living and happy-go-lucky ways are but a memory. It is strange that although the turf has always formed a prolific medium for writing people and has lent itself admirably to fiction, very few authors seem to have taken advantage of the opportunities offered.

As in other branches of sport, Van Loan was quick to see this and he gave us story after story of the kind that men love to read and chuckle over and retail to the first man they meet. And so when you peruse the pages of Old Man Curry's book, you will find Charlie Van Loan at his very best. When one says that it means you will follow a trail blazed by one of the most masterly short story writers we ever had. Better yet, he writes about real people and they do real believable things....