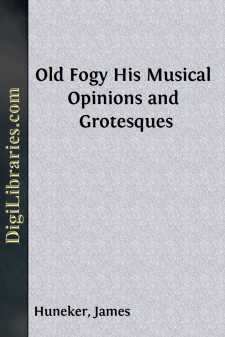 My friend the publisher has asked me to tell you what I know about Old Fogy, whose letters aroused much curiosity and comment when they appeared from time to time in the columns of The Etude. I confess I do this rather unwillingly. When I attempted to assemble my memories of the eccentric and irascible musician I found that, despite his enormous volubility and surface-frankness, the old gentleman seldom allowed us more than a peep at his personality. His was the expansive temperament, or, to employ a modern phrase, the dynamic temperament. Antiquated as were his modes of thought, he would bewilder you with an excursion into latter-day literature, and like a rift of light in a fogbank you then caught a gleam of an entirely different mentality. One day I found him reading a book by the French writer Huysmans, dealing with new art. And he confessed to me that he admired Hauptmann's Hannele, though he despised the same dramatist's Weavers. The truth is that no human being is made all of a piece; we are, mentally at least, more of a mosaic than we believe.

Let me hasten to negative the report that I was ever a pupil of Old Fogy. To be sure, I did play for him once a paraphrase of The Maiden's Prayer (in double tenths by Dogowsky), but he laughed so heartily that I feared apoplexy, and soon stopped. The man really existed. There are a score of persons alive in Philadelphia today who still remember him and could call him by his name—formerly an impossible Hungarian one, with two or three syllables lopped off at the end, and for family reasons not divulged here. He assented that he was a fellow-pupil of Liszt's under the beneficent, iron rule of Carl Czerny. But he never looked his age. Seemingly seventy, a very vital threescore-and-ten, by the way, he was as light on his feet as were his fingers on the keyboard. A linguist, speaking without a trace of foreign accent three or four tongues, he was equally fluent in all. Once launched in an argument there was no stopping him. Nor was he an agreeable opponent. Torrents and cataracts of words poured from his mouth.

He pretended to hate modern music, but, as you will note after reading his opinions, collected for the first time in this volume, he very often contradicts himself. He abused Bach, then used the Well-tempered Clavichord as a weapon of offense wherewith to pound Liszt and the Lisztianer. He attacked Wagner and Wagnerism with inappeasable fury, but I suspect that he was secretly much impressed by several of the music-dramas, particularly Die Meistersinger. As for his severe criticism of metropolitan orchestras, that may be set down to provincial narrowness; certainly, he was unfair to the Philharmonic Society. Therefore, I don't set much store on his harsh judgments of Tchaikovsky, Richard Strauss, and other composers. He insisted on the superiority of Chopin's piano music above all others; nevertheless he devoted more time to Hummel, and I can personally vouch that he adored the slightly banal compositions of the worthy Dussek. It is quite true that he named his little villa on the Wissahickon Creek after Dussek.

Nourished by the romantic writers of the past century, especially by Hoffmann and his fantastic Kreisleriana, their influence upon the writing of Old Fogy is not difficult to detect. He loved the fantastic, the bizarre, the grotesque—for the latter quality he endured the literary work of Berlioz, hating all the while his music. And this is a curious crack in his mental make-up; his admiration for the exotic in literature and his abhorrence of the same quality when it manifested itself in tone. I never entirely understood Old Fogy. In one evening he would flash out a dozen contradictory opinions. Of his sincerity I have no doubt; but he was one of those natures that are sincere only for the moment. He might fume at Schumann and call him a vanishing star, and then he would go to the piano and play the first few pages of the glorious A minor concerto most admirably. How did he play? Not in an extraordinary manner. Solidly schooled, his technical attainments were only of a respectable order; but when excited he revealed traces of a higher virtuosity than was to have been expected....