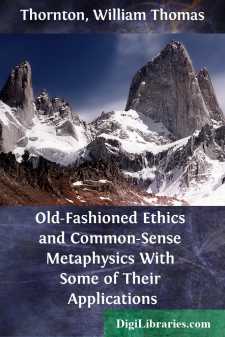 Having, by the heading of this essay, announced that it is intended to be partly controversial, I can scarcely begin better than by furnishing the reader with the means of judging whether I myself correctly apprehend the doctrine which I am about to criticise. If, then, I were myself an Utilitarian, and, for the sake either of vindicating my own belief, or of making converts of other people, had undertaken to explain what Utilitarianism is, I should set about the task somewhat in this wise:—

The sole use and sole object of existence is enjoyment or pleasure, which two words will here be treated as synonymous; happiness, also, though not quite identical in meaning, being occasionally substituted for them. Enjoyment, it must be observed, is of very various kinds, measures, and degrees. It may be sensual, or emotional, or imaginative, or intellectual, or moral. It may be momentary or eternal; intoxicating delight or sober satisfaction. It may be unmixed and undisturbed, in which case, however short of duration or coarse in quality, it may in strictness be called happiness; or it may be troubled and alloyed, although of a flavour which would be exquisite if pure, and if there were nothing to interfere with the perception of it. Understood, however, in a sufficiently comprehensive sense, enjoyment or pleasure may be clearly perceived to be the sole object of existence. The whole value of life plainly consists of the enjoyment, present or future, which life affords, or is capable of affording or securing. Now, the excellence of all rules depends on their conduciveness to the object they have in view. The excellence of all rules of life must, therefore, depend on their conduciveness to the sole object which life has in view, viz., enjoyment. But the excellence of rules of life, or of conduct or modes of acting, would seem to be but another name for their morality, and the morality of actions obviously depends on their conformity to moral rules. Whence, if so much be admitted, it necessarily follows that the test of the morality of actions is their conduciveness to enjoyment.

But the enjoyment thus referred to is not that of the agent alone, for if it were, no action whatever could possibly be immoral. Whatever any one does, he does either because to do it gives him or promises him pleasure, or because he believes that the not doing it would subject him to more pain than he will suffer from doing it. Besides, one person's enjoyment may be obtained at the expense of other people's suffering, so that an act in which the actor takes pleasure may destroy or prevent more pleasure altogether than it creates. The enjoyment or happiness, therefore, which Utilitarianism regards, is not individual, but general happiness; not that of one or of a few, but of the many, nor even of the many only. It is often declared to be the greatest happiness of the greatest number, but it may with more accuracy be described as the largest aggregate of happiness attainable by any or by all concerned. Again, an action which, in some particular instance, causes more pleasure than pain to those affected by it, may yet belong to a class of actions which, in the generality of cases, causes more pain than pleasure, and may thus involve a violation of a moral rule, and, consequently, be itself immoral....