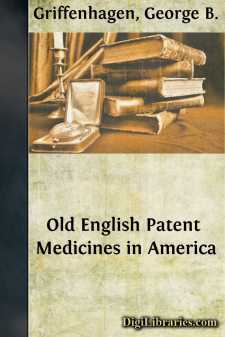 In 1824 there issued from the press in Philadelphia a 12-page pamphlet bearing the title, Formulae for the preparation of eight patent medicines, adopted by the Philadelphia College of Pharmacy. The College was the first professional pharmaceutical organization established in America, having been founded in 1821, and this small publication was its first venture of any general importance. Viewed from the perspective of the mid-20th century, it may seem strange if not shocking that the maiden effort of such a college should be publicizing formulas for nostrums. Adding to the novelty is the fact that all eight of these patent medicines, with which the Philadelphians concerned themselves half a century after American independence, were of English origin.

Hooper's Female Pills, Anderson's Scots Pills, Bateman's Pectoral Drops, Godfrey's Cordial, Dalby's Carminative, Turlington's Balsam of Life, Steer's Opodeldoc, British Oil—in this order do the names appear in the Philadelphia pamphlet—all were products of British therapeutic ingenuity. Across the Atlantic Ocean and on American soil these eight and other old English patent medicines, as of the year when the 12-page pamphlet was printed, had both a past and a future.

When the Philadelphia pharmacists began their study, the eight English patent medicines were from half a century to two centuries old. The most ancient was Anderson's Scots Pills, a product of the 1630's, and the most recent was probably Dalby's Carminative, which appeared upon the scene in the 1780's. Some aspects of the origin and development of these and similar English proprietaries have been treated, but a more thorough search of the sources and a more integrated and interpretive recounting of the story would be a worthy undertaking. Here merely an introduction can be given to the cast of characters prior to their entrances upon the American stage.

The inventor of Anderson's Scots Pills was fittingly enough a Scot named Patrick Anderson, who claimed to be physician to King Charles I. In one of his books, published in 1635, Anderson extolled in Latin the merits of the Grana Angelica, a pill the formula for which he said he had learned in Venice. Before he died, Anderson imparted the secret to his daughter Katherine, and in 1686 she in turn conveyed the secret to an Edinburgh physician named Thomas Weir. The next year Weir persuaded James II to grant him letters patent for the pills. Whether he did this to protect himself against competition that already had begun, or whether the patenting gave a cue to those always ready to cut themselves in on a good thing, cannot be said for sure. The last years of the 17th century, at any rate, saw the commencement of a spirited rivalry among various makers of Anderson's Scots Pills that was long to continue. One of them was Mrs. Isabella Inglish, an enterprising woman who sealed her pill boxes in black wax bearing a lion rampant, three mallets argent, and the bust of Dr. Anderson....