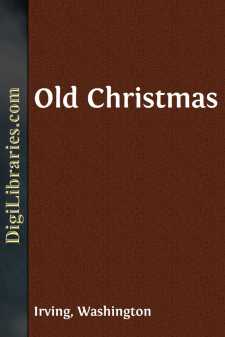 There is nothing in England that exercises a more delightful spell over my imagination than the lingerings of the holiday customs and rural games of former times. They recall the pictures my fancy used to draw in the May morning of life, when as yet I only knew the world through books, and believed it to be all that poets had painted it; and they bring with them the flavour of those honest days of yore, in which, perhaps with equal fallacy, I am apt to think the world was more home-bred, social, and joyous than at present. I regret to say that they are daily growing more and more faint, being gradually worn away by time, but still more obliterated by modern fashion. They resemble those picturesque morsels of Gothic architecture which we see crumbling in various parts of the country, partly dilapidated by the waste of ages, and partly lost in the additions and alterations of latter days. Poetry, however, clings with cherishing fondness about the rural game and holiday revel, from which it has derived so many of its themes,—as the ivy winds its rich foliage about the Gothic arch and mouldering tower, gratefully repaying their support by clasping together their tottering remains, and, as it were, embalming them in verdure.

Of all the old festivals, however, that of Christmas awakens the strongest and most heartfelt associations. There is a tone of solemn and sacred feeling that blends with our conviviality, and lifts the spirit to a state of hallowed and elevated enjoyment. The services of the church about this season are extremely tender and inspiring. They dwell on the beautiful story of the origin of our faith, and the pastoral scenes that accompanied its announcement. They gradually increase in fervour and pathos during the season of Advent, until they break forth in full jubilee on the morning that brought peace and good-will to men. I do not know a grander effect of music on the moral feelings than to hear the full choir and the pealing organ performing a Christmas anthem in a cathedral, and filling every part of the vast pile with triumphant harmony.

It is a beautiful arrangement, also derived from days of yore, that this festival, which commemorates the announcement of the religion of peace and love, has been made the season for gathering together of family connections, and drawing closer again those bands of kindred hearts which the cares and pleasures and sorrows of the world are continually operating to cast loose; of calling back the children of a family who have launched forth in life, and wandered widely asunder, once more to assemble about the paternal hearth, that rallying-place of the affections, there to grow young and loving again among the endearing mementoes of childhood.

There is something in the very season of the year that gives a charm to the festivity of Christmas. At other times we derive a great portion of our pleasures from the mere beauties of nature. Our feelings sally forth and dissipate themselves over the sunny landscape, and we "live abroad and everywhere." The song of the bird, the murmur of the stream, the breathing fragrance of spring, the soft voluptuousness of summer, the golden pomp of autumn; earth with its mantle of refreshing green, and heaven with its deep delicious blue and its cloudy magnificence, all fill us with mute but exquisite delight, and we revel in the luxury of mere sensation....