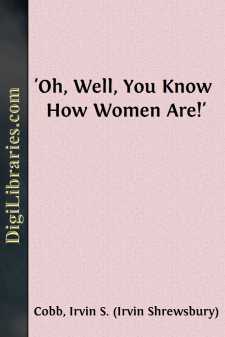 As stated, she emerges. In the doorway she runs into a woman of her acquaintance. If she likes the other woman she is cordial. But if she does not like her she is very, very cordial. A woman’s aversion for another woman moving in the same social stratum in which she herself moves may readily be appraised. Invariably it is in inverse ratio to the apparent affection she displays upon encountering the object of her disfavor. Why should this be? I cannot answer. It is not given for us to know.

[p8]Very well, then, she meets the other woman at the door. They stop for conversation. Two men meeting under the same condition would mechanically draw away a few paces, out of the route of persons passing in or out of the shop. No particular play of the mental processes would actuate them in so doing; an instinctive impulse, operating mechanically and subconsciously, would impel them to remove themselves from the main path of foot travel. But this woman and her acquaintance take root right there. Persons dodge round them and glare at them. Other persons bump into them, and are glared at by the two traffic blockers. Where they stand they make a knot of confusion.

But does it occur to either of them to suggest that they might step aside, five feet or ten, and save themselves, and the pedestrian classes generally, a deal of delay and considerable annoyance? It does not. It never will. If the meeting took place in a narrow passageway or on a populous staircase or at the edge of the orbit of a set of swinging doors or on a fire escape landing upon the front of a burning building, while one was going up to aid in the rescue and the other was coming down to be saved—if it took place just outside the Pearly Gates on the Last Day [p9] when the quick and the dead, called up for judgment, were streaming in through the portals—still would they behave thus. Where they met would be where they stopped to talk, regardless of the consequences to themselves, regardless of impediment to the movements of their fellow beings.

Having had her say with her dear friend or her dear enemy, as the case may be, our heroine proceeds to the corner and hails a passing street car. Because her heels are so high and her skirts are so snug, she takes about twice the time to climb aboard that a biped in trousers would take. Into the car she comes, teetering and swaying. The car is no more than comfortably filled. True, all the seats at the back where she has entered are occupied; but up at the front there still is room for another sittee or two. Does she look about her to ascertain whether there is any space left? I need not pause for reply. I know it already, and so do you. Midway of the aisle-length she stops and reaches for a strap. She makes an appealing picture, compounded of blindness, helplessness, and discomfort. She has clinging vine written all over her. She craves to cling, but there is no trellis. So she swings from her strap.

[p10]The passengers nearest her are all men....