'Of Genius', in The Occasional Paper, and Preface to The Creation 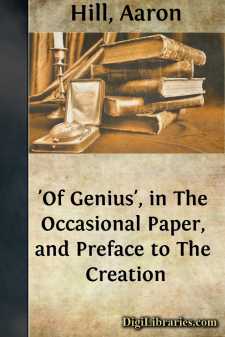 The anonymous essay "Of Genius," which appeared in the Occasional Paper of 1719, still considers "genius" largely a matter of aptitude or talent, and applies the term to the "mechanick" as well as the fine arts. The work is, in fact, essentially a pamphlet on education. The author's main concern is training, and study, and conscious endeavor. Naturally enough, his highest praise—even where poetry is in question—is reserved for those solid Augustan virtues of "judgment" and "good sense."

And yet the pamphlet reveals some of the tangled roots from which the later concept of the "original" or "primitive" genius grew. For here are two prerequisites of that later, more extravagant concept. One is the author's positive delight in the infinite differences of human temperaments and talents—a delight from which might spring the preference for original or unique works of art. The other is his conviction that there is something necessary and foreordained about those differences: a conviction essential to faith in the artist who is apparently at the mercy of a genius beyond his own control. The importance of this latter belief was long ago indicated in Paul Kaufman's "Heralds of Original Genius."

While his tone is perhaps more exuberant than that of most of his immediate contemporaries, there is nothing particularly new in our author's interest in those aspects of human nature which render a man different from his fellows. It is true that the main stress of neoclassical thought had rested on the fundamental likeness of all men in all ages, and had sought an ideal and universal norm in morals, conduct, and art. But there had always been counter currents making for a recognition of the inescapable differences among various races and individuals. Such deviations were often merely tolerated, but toward the close of the seventeenth century more and more voices had praised human diversity. England, in particular, began to take notice of the number of "originals" abounding in the land.

At least as old as the delight in human differences was the belief in the foreordained nature of at least those differences resulting in specific vocational aptitudes. This is the conviction that each man has at birth—innately and inevitably—a peculiar "bent" for some particular contribution to human society. Environment is not ignored by the man who wrote "Of Genius," for he insists that each man's bent may be greatly developed by favorable circumstances and proper education, and, conversely, that it may be entirely frustrated by unpropitious circumstances or wilful neglect. But in no way can a man's inborn talent for one thing be converted to a talent for anything else.

In the works of many Augustan writers, too, it is easy to see how the enthusiasm for individualism, later to become one of the hallmarks of romanticism, actually sprang from an earlier faith in a God-directed universe of law and order. There is a kind of universal law of supply and demand, and the argument is simply that each link in the human chain, like those in the animate and inanimate worlds above and below it, is predestined to a specific function for the better ordering of the whole....