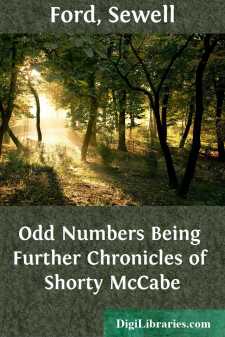 CHAPTER I GOLIAH AND THE PURPLE LID

One of my highbrow reg’lars at the Physical Culture Studio, a gent that mixes up in charity works, like organizin’ debatin’ societies in the deaf and dumb asylums, was tellin’ me awhile back of a great scheme of his to help out the stranger in our fair village. He wants to open public information bureaus, where a jay might go and find out anything he wanted to know, from how to locate a New Thought church, to the nearest place where he could buy a fresh celluloid collar.

“Get the idea?” says he. “A public bureau where strangers in New York would be given courteous attention, friendly advice, and that sort of thing.”

Course, I was just gettin’ over a josh. But say, it ain’t all a funny dream, either. Don’t a lot of ’em come my way? Maybe it’s because I’m so apt to lay myself open to the confidential tackle. But somehow, when I see one of these tourist freaks sizin’ me up, and lookin’ kind of dazed and lonesome, I can’t chuck him back the frosty stare. I’ve been a stray in a strange town myself. So I gen’rally tries to seem halfway human, and if he opens up with some shot on the weather, I let him get in the follow-up questions and take the chances.

Here the other day, though, I wa’n’t lookin’ for anything of the kind. I was just joltin’ down my luncheon with a little promenade up the sunny side of Avenue V, taking in the exhibits—things in the show windows and folks on the sidewalks—as keen as if I’d paid in my dollar at some ticket office.

And say, where can you beat it? I see it ’most every day in the year, and it’s always new. There’s different flowers in the florists’ displays, new flags hung out on the big hotels, and even the chorus ladies in the limousines are changed now and then.

I can’t figure out just what it was landed me in front of this millinery window. Gen’rally I hurry by them exhibits with a shudder; for once I got gay and told Sadie to take her pick, as this one was on me; and it was months before I got over the shock of payin’ that bill. But there I finds myself, close up to the plate glass, gawpin’ at a sample of what can be done in the hat line when the Bureau of Obstructions has been bought off and nobody’s thought of applyin’ the statute of limitations.

It’s a heliotrope lid, and the foundation must have used up enough straw to bed down a circus. It has the dimensions and general outlines of a summerhouse. The scheme of decoration is simple enough, though. The top of this heliotrope summerhouse has been caught in a heliotrope fog, that’s all. There’s yards and yards of this gauzy stuff draped and puffed and looped around it, with only a wide purple ribbon showin’ here and there and keepin’ the fog in place.

Well, all that is restin’ careless in a box, the size of a quarter-mile runnin’ track, with the cover half off. And it’s a work of art in itself, that box,—all Looey Cans pictures, and a thick purple silk cord to tie it up with....