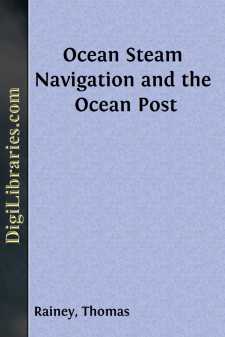 In offering to the Government and the public this little volume on Ocean Steam Navigation and the Ocean Post, I am conscious of my inability to present any new views on a subject that has engaged the attention of many of the most gifted statesmen and economists of this country and Europe. There is, however, no work, so far as I am informed, in any country, which treats of Marine Steam Navigation in its commercial, political, economic, social, and diplomatic bearings, or discusses so far the theory and practice of navigation as to develop the cost and difficulties attending high speed on the ocean, or the large expense incurred in a rapid, regular, and reliable transport of the foreign mails.

It has been repeatedly suggested to the undersigned by members of Congress, and particularly by some of the members of the committees on the Post Office and Post Roads in the Senate and House of Representatives, that there was no reliable statement, such as that which I have endeavored to furnish, on the general topics connected with trans-marine steam navigation, to which those not specially informed on the subject, could refer for the settlement of the many disputed points brought before Congress and the Departments. It is represented that there are many conflicting statements regarding the capabilities of ocean steam; the cost of running vessels; the consumption of fuel; the extent and costliness of repairs; the depreciation of vessels; the cost of navigating them; the attendant incidental expenses; the influence of ocean mails in promoting trade; the wants of commercial communities; the adaptation of the mail vessels to the war service; the rights of private enterprise; and the ability of ocean steamers generally to support themselves on their own receipts.

While this is true, there is no work on this general subject to which persons can refer for the authoritative settlement of any of these points, either absolutely or proximately; and while a simple statement of facts, acknowledged by all steamship-men, may tend to dispel much misapprehension on this interesting subject, it will also be not unprofitable, I trust, to review some of the prominent arguments on which the mail steamship system is based. That system should stand or fall on its own merits or demerits alone; and to be permanent, it must be based on the necessities of the community, and find its support in the common confidence of all classes. I have long considered a wise, liberal, and extended steam mail system vitally essential to the commerce of the country, and to the continued prosperity and power of the American Union. Yet, I am thoroughly satisfied that this very desirable object can never be attained by private enterprise, or otherwise than through the direct pecuniary agency and support of the General Government. The abandonment of our ocean steam mail system is impossible so long as we are an active, enterprising, and commercial people. And so far from the service becoming self-supporting, it is probable that it will never be materially less expensive than at the present time....