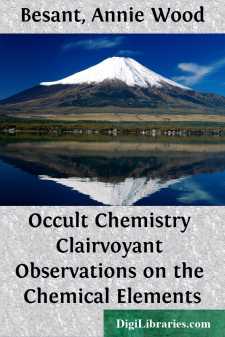 CHAPTER I. A PRELIMINARY SURVEY.

The deep interest and importance of the research which this book describes will best be appreciated if introduced by an account of the circumstances out of which it arose. The first edition, consisting mainly of articles reprinted from the Theosophist, dealt at once with the later phases of the research in a way which, though intelligible to the occult student, must have been rather bewildering to the ordinary reader. These later phases, however, endow the earlier results with a significance that in the beginning could only be vaguely conjectured. I am the better entitled to perform the task that has been assigned to me—that of preparing the present edition—by reason of the fact that it was in my presence and at my instigation that the first efforts were made to penetrate the mystery previously enshrouding the ultimate molecule of matter.

I remember the occasion vividly. Mr. Leadbeater was then staying at my house, and his clairvoyant faculties were frequently exercised for the benefit of myself, my wife and the theosophical friends around us. I had discovered that these faculties, exercised in the appropriate direction, were ultra-microscopic in their power. It occurred to me once to ask Mr. Leadbeater if he thought he could actually see a molecule of physical matter. He was quite willing to try, and I suggested a molecule of gold as one which he might try to observe. He made the appropriate effort, and emerged from it saying the molecule in question was far too elaborate a structure to be described. It evidently consisted of an enormous number of some smaller atoms, quite too many to count; quite too complicated in their arrangement to be comprehended. It struck me at once that this might be due to the fact that gold was a heavy metal of high atomic weight, and that observation might be more successful if directed to a body of low atomic weight, so I suggested an atom of hydrogen as possibly more manageable. Mr. Leadbeater accepted the suggestion and tried again. This time he found the atom of hydrogen to be far simpler than the other, so that the minor atoms constituting the hydrogen atom were countable. They were arranged on a definite plan, which will be rendered intelligible by diagrams later on, and were eighteen in number.

We little realized at the moment the enormous significance of this discovery, made in the year 1895, long before the discovery of radium enabled physicists of the ordinary type to improve their acquaintance with the "electron." Whatever name is given to that minute body it is recognised now by ordinary science as well as by occult observation, as the fundamental unit of physical matter. To that extent ordinary science has overtaken the occult research I am dealing with, but that research rapidly carried the occult student into regions of knowledge whither, it is perfectly certain, the ordinary physicist must follow him at no distant date.

The research once started in the way I have described was seen to be intensely interesting....