Observations on the Mussulmauns of India Descriptive of Their Manners, Customs, Habits and Religious Opinions Made During a Twelve Years' Residence in Their Immediate Society 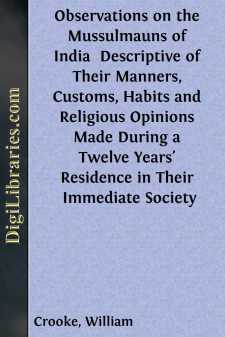 Very little is known about the authoress of this interesting book. She is reticent about the affairs of her husband and of herself, and inquiries recently made at Lucknow, at the India Office, and in other likely quarters in England, have added little to the scanty information we possess about her.

The family of her husband claimed to be of Sayyid origin, that is to say, to be descended from the martyrs, Hasan and Husain, the sons of Fatimah, daughter of the Prophet, by her marriage with her cousin-german, 'Ali. The father-in-law of the authoress, Mir Haji Shah, of whom she speaks with affection and respect, was the son of the Qazi, or Muhammadan law-officer, of Ludhiana, in the Panjab. During his boyhood the Panjab was exposed to raids by the Mahrattas and incursions of the Sikhs. He therefore abandoned his studies, wandered about for a time, and finally took service with a certain Raja—where she does not tell us—who was then raising a force in expectation of an attack by the Sikhs. He served in at least one campaign, and then, while still a young man, made a pilgrimage thrice to Mecca and Kerbela, which gained him the title of Haji, or pilgrim. While he was in Arabia he fell short of funds, but he succeeded in curing the wife of a rich merchant who had long suffered from a serious disease. She provided him with money to continue his journey. He married under romantic circumstances an Arab girl named Fatimah as his second wife, and then went to Lucknow, which, under the rule of the Nawabs, was the centre in Northern India of the Shi'ah sect, to which he belonged. Here he had an exciting adventure with a tiger during a hunting party, at which the Nawab, Shuja-ud-daula, was present. He is believed to have held the post of Peshnamaz, or 'leader in prayer', in the household of the eunuch, Almas 'Ali Khan, who is referred to by the authoress.

His son was Mir Hasan 'Ali, the husband of the authoress. The tradition in Lucknow is that he quarrelled with his father and went to Calcutta, where he taught Arabic to some British officers and gained a knowledge of English. We next hear of him in England, when in May 1810 he was appointed assistant to the well-known oriental scholar, John Shakespear, professor of Hindustani at the Military College, Addiscombe, from 1807 to 1830, author of a dictionary of Hindustani and other educational works. Mention is made of two cadets boarding with Mir Hasan 'Ali, but it does not appear from the records where he lived. After remaining at the College for six years he resigned his appointment on the ground of ill-health, with the intention of returning to India. He must have been an efficient teacher, because, on his resignation, the East India Company treated him with liberality. He received a gift of £50 as a reward for his translation of the Gospel of St. Matthew, and from the Court minutes it appears that on December 17, 1816, it was resolved to grant him 100 guineas to provide his passage and £100 for equipment. Further, the Bengal Government was instructed to furnish him on his arrival with means to reach his native place, and to pay him a pension of Rs....