Nye and Riley's Wit and Humor (Poems and Yarns) 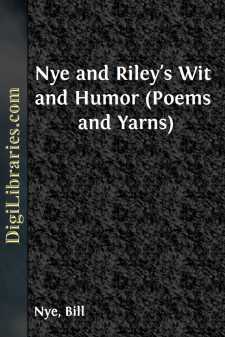 Edgar Wilson Nye was whole-souled, big-hearted and genial. Those who knew him lost sight of the humorist in the wholesome friend.

He was born August 25, 1850, in Shirley, Piscataquis County, Maine. Poverty of resources drove the family to St. Croix Valley, Wisconsin, where they hoped to be able to live under conditions less severe. After receiving a meager schooling, he entered a lawyer's office, where most of his work consisted in sweeping the office and running errands. In his idle moments the lawyer's library was at his service. Of this crude and desultory reading he afterward wrote:

At the age of twenty-five, he was teaching a district school in Polk County, Wisconsin, at thirty dollars a month. In 1877 he was justice of the peace in Laramie. Of that experience he wrote:

"It was really pathetic to see the poor little miserable booth where I sat and waited with numb fingers for business. But I did not see the pathos which clung to every cobweb and darkened the rattling casement. Possibly I did not know enough. I forgot to say the office was not a salaried one, but solely dependent upon fees. So while I was called Judge Nye and frequently mentioned in the papers with consideration, I was out of coal half the time, and once could not mail my letters for three weeks because I did not have the necessary postage."

He wrote some letters to the Cheyenne Sun, and soon made such a reputation for himself that he was able to obtain a position on the Laramie Sentinel. Of this experience he wrote:

"The salary was small, but the latitude was great, and I was permitted to write anything that I thought would please the people, whether it was news or not. By and by I had won every heart by my patient poverty and my delightful parsimony with regard to facts. With a hectic imagination and an order on a restaurant which advertised in the paper I scarcely cared through the livelong day whether school kept or not."

Of the proprietor of the Sentinel he wrote:

"I don't know whether he got into the penitentiary or the Greenback party. At any rate, he was the wickedest man in Wyoming. Still, he was warmhearted and generous to a fault. He was more generous to a fault than to anything else—more especially his own faults. He gave me twelve dollars a week to edit the paper—local, telegraph, selections, religious, sporting, political, fashions, and obituary. He said twelve dollars was too much, but if I would jerk the press occasionally and take care of his children he would try to stand it. You can't mix politics and measles. I saw that I would have to draw the line at measles. So one day I drew my princely salary and quit, having acquired a style of fearless and independent journalism which I still retain. I can write up things that never occurred with a masterly and graphic hand. Then, if they occur, I am grateful; if not, I bow to the inevitable and smother my chagrin."

In the midst of a wrangle in politics he was appointed Postmaster of his town and his letter of acceptance, addressed to the Postmaster-General at Washington, was the first of his writings to attract national attention.

He said that in his opinion, his being selected for the office was a triumph of eternal right over error and wrong. "It is one of the epochs, I may say, in the nation's onward march toward political purity and perfection," he wrote. "I don't know when I have noticed any stride in the affairs of State which has so thoroughly impressed me with its wisdom."

Shortly after he became postmaster he started the Boomerang. The first office of the paper was over a livery stable, and Nye put up a sign instructing callers to "twist the tail of the gray mule and take the elevator."

He at once became famous, and was soon brought to New York, at a salary that seemed fabulous to him. His place among the humorists of the world was thenceforth assured.

He died February 22, 1896, at his home in North Carolina, surrounded by his family.

James Whitcomb Riley, the Hoosier poet, was for many years a close personal friend of the dead humorist. When informed of Nye's death, he said:

"Especially favored, as for years I have been, with close personal acquaintance and association with Mr....