Now or Never The Adventures of Bobby Bright 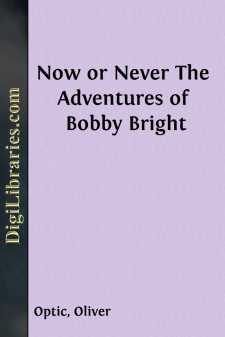 CHAPTER I IN WHICH BOBBY GOES A FISHING, AND CATCHES A HORSE

"By jolly! I've got a bite!" exclaimed Tom Spicer, a rough, hard-looking boy, who sat on a rock by the river's side, anxiously watching the cork float on his line.

"Catch him, then," quietly responded Bobby Bright, who occupied another rock near the first speaker, as he pulled up a large pout, and, without any appearance of exultation, proceeded to unhook and place him in his basket.

"You are a lucky dog, Bob," added Tom, as he glanced into the basket of his companion, which now contained six good-sized fishes. "I haven't caught one yet."

"It don't make any difference how I fish; it is all luck."

"Not all luck, Tom; there is something in doing it right."

"I shall not catch a fish," continued Tom, in despair.

"You'll catch something else, though, when you go home."

"Didn't you tell me you were 'hooking jack'?"

"Who is going to know anything about it?"

"The master will know you are absent."

"I shall tell him my mother sent me over to the village on an errand."

"I never knew a fellow to 'hook jack,' yet, without getting found out."

"I shall not get found out unless you blow on me; and you wouldn't be mean enough to do that;" and Tom glanced uneasily at his companion.

"Suppose your mother should ask me if I had seen you."

"You would tell her you have not, of course."

"Why, wouldn't you? Wouldn't you do as much as that for a fellow?"

"I wouldn't lie for any fellow," replied Bobby, stoutly, as he pulled in his seventh fish, and placed him in the basket.

"Then let me tell you this; if you peach on me, I'll smash your head."

Tom Spicer removed one hand from the fish pole and, doubling his fist, shook it with energy at his companion.

"Smash away," replied Bobby, coolly. "I shall not go out of my way to tell tales; but if your mother or the master asks me the question, I shall not lie."

"I'll bet you will;" and Tom dropped his fish pole, and was on the point of jumping over to the rock occupied by Bobby, when the float of the former disappeared beneath the surface of the water.

"You've got a bite," coolly interposed Bobby, pointing to the line.

Tom snatched the pole, and with a violent twitch, pulled up a big pout; but his violence jerked the hook out of the fish's mouth, and he disappeared beneath the surface of the river.

"All right; but you had better not let go your pole again, or you will lose another fish."

"I'm bound to smash your head, though."

"Two can play at that game."

"But I will defend myself."

"I am not a liar, and the fear of a flogging shall not make me tell a lie."

"Go to Sunday school—don't you?"

"I do; and besides that, my mother always taught me never to tell a lie."