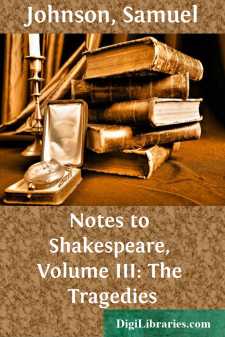 (392) Most of the notes which the present editor has subjoined to this play were published by him in a small pamphlet in 1745.

I.i (393,*) Enter three Witches] In order to make a true estimate of the abilities and merit of a writer, it it always necessary to examine the genius of his age, and the opinions of his contemporaries. A poet who should now make the whole action of his tragedy depend upon enchantment, and produce the chief events by the assistance of supernatural agents, would be censured as transgressing the bounds of probability, be banished from the theatre to the nursery, and condemned to write fairy tales instead of tragedies; but a survey of the notions that prevailed at the time when this play was written, will prove that Shakespeare was in no danger of such censures, since he only turned the system that was then universally admitted, to his advantage, and was far from overburthening the credulity of his audience.

The reality of witchcraft or enchantment, which, though not strictly the same, are confounded in this play, has in all ages and countries been credited by the common people, and in most, by the learned themselves. These phantoms have indeed appeared more frequently, in proportion as the darkness of ignorance has been more gross; but it cannot be shown, that the brightest gleams of knowledge have at any time been sufficient to drive them out of the world. The time in which this kind of credulity was at its height, seems to have been that of the holy war, in which the Christians imputed all their defeats to enchantments or diabolical opposition, as they ascribed their success to the assistance of their military saints; and the learned Dr. Warburton appears to believe (Suppl. to the Introduction to Don Quixote) that the first accounts of enchantments were brought into this part of the world by those who returned from their eastern expeditions. But there is always some distance between the birth and maturity of folly as of wickedness: this opinion had long existed, though perhaps the application of it had in no foregoing age been so frequent, nor the reception so general. Olympiodorus, in Photius's extracts, tells us of one Libanius, who practised this kind of military magic, and having promised [Greek: choris opliton kata barbaron energein] to perform great things against the Barbarians without soldiers, was, at the instances of the empress Placidia, put to death, when he was about to have given proofs of his abilities. The empress shewed some kindness in her anger by cutting him off at a time so convenient for his reputation.

But a more remarkable proof of the antiquity of this notion may be found in St. Chrysostom's book de Sacerdotia, which exhibits a scene of enchantments not exceeded by any romance of the middle age: he supposes a spectator overlooking a field of battle attended by one that points out all the various objects of horror, the engines of destruction, and the arts of slaughter. [Greek: Deichnuto de eti para tois enantiois kai petomenous hippous dia tinos magganeias, kai oplitas di' aeros pheromenous, kai pasaen goaeteias dunomin kai idean.] Let him then proceed to shew him in the opposite armies horses flying by enchantment, armed men transported through the air, and every power and form of magic....