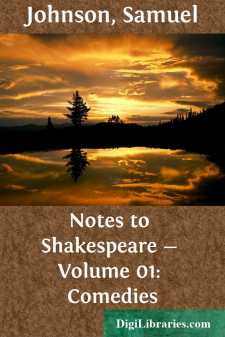 Dr. Johnson's Preface to Shakespeare is one of the most famous critical essays of the eighteenth century, and yet too many students have forgotten that it is, precisely, a preface to the plays of Shakespeare, edited by Dr. Johnson himself. That is to say, the edition itself has been obscured or overshadowed by its preface, and the sustained effort of that essay has virtually monopolized scholarly attention—much of which should be directed to the commentary. Johnson's love for Shakespeare's plays is well known; nowhere is this more manifest than in his notes on them. And it is on the notes that his claim to remembrance as a critic of Shakespeare must rest, for the famous Preface is, after all, only rarely an original and personal statement.

The idea of editing Shakespeare's plays had attracted Johnson early, and in 1745 he issued proposals for an edition. Forced to give up the project because of copyright difficulties, he returned to it again in 1756 with another, much fuller set of proposals. Between 1745 and 1756 he had completed the great Dictionary and could advance his lexicographical labors as an invaluable aid in the explication of Shakespeare. Although he had promised speedy publication, "on or before Christmas 1757," Johnson's public had to wait until Oct. 10, 1765 for the Shakespeare edition to appear. The first edition, largely subscribed for, was soon exhausted, and a second edition was ready the very next month. A third edition was published in 1768, but there were no revisions in the notes in either of these editions. At some time after February 1, 1766, the date of George Steevens' own proposals for an edition of Shakespeare, and before March 21, 1770 when Johnson wrote to Richard Farmer for some assistance in the edition (Life, II, 114), Johnson decided to join forces with Steevens. The result was, of course, the so-called 1773 Johnson-Steevens variorum from which the notes in this reprint are taken. A second Johnson-Steevens variorum appeared in 1778, but Johnson's part in this was negligible, and I have been able to find only fifty-one revisions (one, a definition, is a new note) which I feel reasonably certain are his. The third variorum, edited by Isaac Reed in 1785, contains one revision in Johnson's notes.

"Dr. Johnson has displayed, in this revisal, such ingenuity, and accuracy of just conception, as render the present annotations a valuable addition to his former remarks on the subject." The writer is a reviewer for the Critical Review (Dee., 1773, p. 416); the work in question is the 1773 Johnson-Steevens edition of Shakespeare's plays. The remark quoted is from the last paragraph of a long review beginning in November and seems almost an afterthought, for the same reviewer had said that the edition "deserves to be considered as almost entirely the production of Mr. Steevens" (p. 346). In a sense this is true, but the basis for the commentary in the 1773 edition was still the approximately 5600 notes, both his own and those of previous editors and critics, that had appeared in Dr. Johnson's 1765 edition. The actual text of the plays is another matter; a combination of collation and judicious borrowing, it was provided by George Steevens. Steevens' contributions to the text and annotation of Shakespeare's plays concern students of the dramatist; That Johnson had to say about the plays concerns Johnsonians as veil as Shakespeareans. And it is unfortunately true that too little attention has been paid to what is after all Johnson's final and reconsidered judgment on a number of passages in the plays.

The decision to reprint the commentary in the 1773 edition may be questioned. Should not the 1765 text of the notes be reprinted, since it, after all, is nearest to the author's manuscript?...