Notes on the Apocalypse 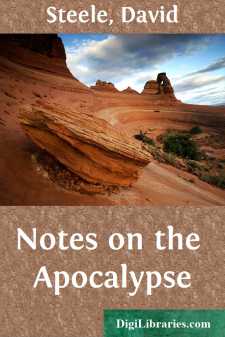 1. The Revelation of Jesus Christ, which God gave unto him, to show unto his servants things which must shortly come to pass; and he sent and signified it by his angel unto his servant John:

2. Who bare record of the word of God, and of the testimony of Jesus Christ, and of all things that he saw.

3. Blessed is he that readeth, and they that hear the words of this prophecy, and keep those things which are written therein; for the time is at hand.

Verses 1-3.—Here, our divine Mediator appears in the continued exercise of his prophetical office "in his estate of exaltation." While present with his disciples on earth, he told them he had many things to say to them, but they could not hear them then. (John xvi. 12) Upon his ascension he fulfilled his own and his Father's promise in sending the Holy Spirit to guide them into all truth—bring all things to their remembrance, and show them things to come. (v. 13.) The fulfilment of this promise we have in the whole of the New Testament,—doctrines, facts and predictions.

Jesus said,—"Of mine own-self I can do nothing." (v. 30.) The same is true of his teachings as of his works:—"The words that I speak unto you, I speak not of myself, (xiv. 10.) In all that "Jesus began both to do and to teach," (Acts i. 1,) he was instructed by his Father. These things are all plainly implied in the first verse. Indeed, the official actings of the three Persons in the Godhead had been frequently taught by Christ during the time of his personal ministry; and they are more fully and frequently recorded by the beloved disciple than by any other evangelist, in that gospel which still bears this apostle's name. Thus, it appears that although this book is called a "Revelation of Jesus Christ," he is not the ultimate author. It is a revelation "which God gave unto him." By God here, we are to understand the person of the Father. The reader is thus conducted to the divine origin of all supernatural revelation,—the eternal purpose of God. (Heb. i. 1, 2.) The object of the whole Bible, in the evolvement of the divine economy of man's redemption, appears to be the unfolding of the ineffable mystery of the Trinity, and displaying the perfections of the Godhead, to his own glory as the highest and last end.

The channel through which the divine will comes to the church, is exhibited in the beginning of this book. Originating with God the Father, passing to the Mediator, communicated to a holy angel; by his ministry it is made known to John, who reveals it to the church! How beautiful the order here! How wonderful and condescending on the part of God!

Although we commonly and justly designate the whole Bible by the name "Revelation;" yet we are to consider that this book is so called by way of eminence. Doubtless it is so styled by its divine Author because it reveals events which were then future, and which could not be discovered by human sagacity. But this holds equally true of other parts of the Scriptures, especially those parts which are prophetical....