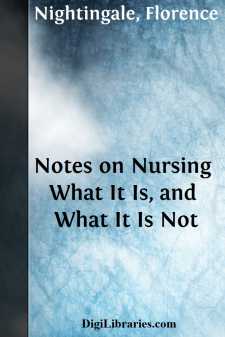 I. VENTILATION AND WARMING. First rule of nursing, to keep the air within as pure as the air without.

The very first canon of nursing, the first and the last thing upon which a nurse's attention must be fixed, the first essential to the patient, without which all the rest you can do for him is as nothing, with which I had almost said you may leave all the rest alone, is this: To keep the air he breathes as pure as the external air, without chilling him. Yet what is so little attended to? Even where it is thought of at all, the most extraordinary misconceptions reign about it. Even in admitting air into the patient's room or ward, few people ever think, where that air comes from. It may come from a corridor into which other wards are ventilated, from a hall, always unaired, always full of the fumes of gas, dinner, of various kinds of mustiness; from an underground kitchen, sink, washhouse, water-closet, or even, as I myself have had sorrowful experience, from open sewers loaded with filth; and with this the patient's room or ward is aired, as it is called—poisoned, it should rather be said. Always air from the air without, and that, too, through those windows, through which the air comes freshest. From a closed court, especially if the wind do not blow that way, air may come as stagnant as any from a hall or corridor.

Again, a thing I have often seen both in private houses and institutions. A room remains uninhabited; the fire place is carefully fastened up with a board; the windows are never opened; probably the shutters are kept always shut; perhaps some kind of stores are kept in the room; no breath of fresh air can by possibility enter into that room, nor any ray of sun. The air is as stagnant, musty, and corrupt as it can by possibility be made. It is quite ripe to breed small-pox, scarlet fever, diphtheria, or anything else you please.

Yet the nursery, ward, or sick room adjoining will positively be aired (?) by having the door opened into that room. Or children will be put into that room, without previous preparation, to sleep.

A short time ago a man walked into a back-kitchen in Queen square, and cut the throat of a poor consumptive creature, sitting by the fire. The murderer did not deny the act, but simply said, "It's all right." Of course he was mad.

But in our case, the extraordinary thing is that the victim says, "It's all right," and that we are not mad. Yet, although we "nose" the murderers, in the musty unaired unsunned room, the scarlet fever which is behind the door, or the fever and hospital gangrene which are stalking among the crowded beds of a hospital ward, we say, "It's all right."

With a proper supply of windows, and a proper supply of fuel in open fire places, fresh air is comparatively easy to secure when your patient or patients are in bed. Never be afraid of open windows then. People don't catch cold in bed. This is a popular fallacy. With proper bed-clothes and hot bottles, if necessary, you can always keep a patient warm in bed, and well ventilate him at the same time.

But a careless nurse, be her rank and education what it may, will stop up every cranny and keep a hot-house heat when her patient is in bed,—and, if he is able to get up, leave him comparatively unprotected. The time when people take cold (and there are many ways of taking cold, besides a cold in the nose,) is when they first get up after the two-fold exhaustion of dressing and of having had the skin relaxed by many hours, perhaps days, in bed, and thereby rendered more incapable of re-action. Then the same temperature which refreshes the patient in bed may destroy the patient just risen. And common sense will point out that, while purity of air is essential, a temperature must be secured which shall not chill the patient. Otherwise the best that can be expected will be a feverish re-action.

To have the air within as pure as the air without, it is not necessary, as often appears to be thought, to make it as cold.

In the afternoon again, without care, the patient whose vital powers have then risen often finds the room as close and oppressive as he found it cold in the morning. Yet the nurse will be terrified, if a window is opened.

I know an intelligent humane house surgeon who makes a practice of keeping the ward windows open. The physicians and surgeons invariably close them while going their rounds; and the house surgeon very properly as invariably opens them whenever the doctors have turned their backs.

In a little book on nursing, published a short time ago, we are told, that "with proper care it is very seldom that the windows cannot be opened for a few minutes twice in the day to admit fresh air from without." I should think not; nor twice in the hour either. It only shows how little the subject has been considered.