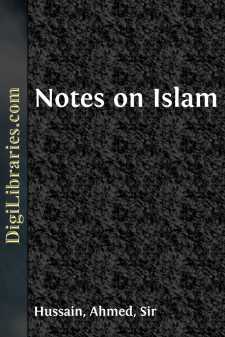 WO of you—Lateef and Altaf—will recollect that more than a year ago you wrote to me saying that you were puzzled by certain questions which a Missionary had put to you. I remember that Amjud or Mahmood even went so far as to ask what was the good of Islam, when countries and people professing that faith had weak governments and were crumbling to pieces under the influence of Christian Powers. I answered your queries only in a general way as your University education had not then advanced far enough. But I think the time has now come when I should try to explain to you what I conceive to be the true spirit of the religion of our fore-fathers.

I firmly believe that Islam is the best religion in the world—I mean, Islam rightly understood and interpreted and not the Muhammadanism of some of our formularist Maulavies, who say that a man goes to Hell or Heaven according as he wears his trousers lower or higher than his ankles! They have degraded our religion by paying undue attention to formulas and forms to the exclusion and neglect of its living spirit and reality. The poet Hafiz rightly stigmatised their vain controversies when he said that Ú†ÙˆÙ† Ù†Ø¯ÙŠØ¯Ù†Ø¯ Ø­Ù‚ÙŠÙ‚Øª Ø±Ù‡ Ø§ÙØ³Ø§Ù†Ù‡ Ø²Ø¯Ù†Ø¯ "since they did not see the fact, they ran after fiction."

I am more than ever convinced of two characteristics of Islam:—

1st.—It is not inconsistent with true Christianity, or with any other true religion of which the fundamental principle is ØªÙˆØ­ÙŠØ¯ One God Ù„Ø§ Ø´Ø±ÙŠÙƒ Ù„Ù‡ Ùˆ Ø­Ø¯Ù‡ "the Peerless One."

2nd.—It conforms to modern scientific ideas better than any other religion.

I have already explained, in some of my letters to you, why I believe that Islam is but a continuation and consummation of Christianity as taught by Jesus himself in his own speeches which are reported in the Synoptic Gospels of the New Testament. We have nothing to do with the interpretation of his words by his Apostles and others after them. If we take the plain words and the plain meaning of those words reported to have proceeded from his own blessed mouth, we clearly see that they teach the same sublime truths as our Prophet himself inculcated. Jesus did not live long to complete his mission, Muhammad completed it. Both were God's holy messengers Ø±Ø³Ù„ Ø§Ù„. Says the Qur'an: "This day I have completed your religion for you." Ø§Ù„ÙŠÙˆÙ… Ø§ÙƒÙ…Ù„Øª Ø§ÙƒÙ… Ø¯ÙŠÙ†ÙƒÙ…

I need not now go into details, or refer to other religions, to shew that the spirit of Islam is not inconsistent with their true spirit, if rightly conceived and interpreted in the light of modern science. I hope I shall be able some day to write down the result of my own thought and investigation in the matter. I content myself at present with drawing your attention to the first characteristic of Islam, and I propose to write a few Notes to draw your special attention to its second characteristic which is the more remarkable—the characteristic that it is quite consistent with modern ideas of science....