Notes and Queries, Number 81, May 17, 1851 A Medium of Inter-communication for Literary Men, Artists, Antiquaries, Genealogists, etc 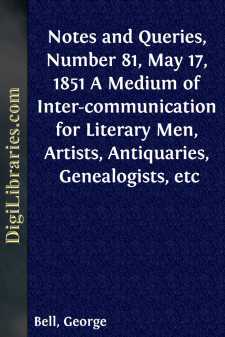 Notes. ILLUSTRATIONS OF CHAUCER, NO. VI.

Unless Chaucer had intended to mark with particular exactness the day of the journey to Canterbury, he would not have taken such unusual precautions to protect his text from ignorant or careless transcribers. We find him not only recording the altitudes of the sun, at different hours, in words; but also corroborating those words by associating them with physical facts incapable of being perverted or misunderstood.

Had Chaucer done this in one instance only, we might imagine that it was but another of those occasions, so frequently seized upon by him, for the display of a little scientific knowledge; but when he repeats the very same precautionary expedient again, in the afternoon of the same day, we begin to perceive that he must have had some fixed purpose; because, as I shall presently show, it is the repetition alone that renders the record imperishable.

But whether Chaucer really devised this method for the express purpose of preserving his text, or not, it has at least had that effect,—for while there are scarcely two MSS. extant which agree in the verbal record of the day and hours, the physical circumstances remain, and afford at all times independent data for the recovery or correction of the true reading.

The day of the month may be deduced from the declination of the sun; and, to obtain the latter, all the data required are,

1. The latitude of the place.

2. Two altitudes of the sun at different sides of noon.

It is not absolutely necessary to have any previous knowledge of the hours at which these altitudes were respectively obtained, because these may be discovered by the trial method of seeking two such hours as shall most nearly agree in requiring a declination common to both at the known altitudes. Of course it will greatly simplify the process if we furthermore know that the observations must have been obtained at some determinate intervals of time, such, for example, as complete hours.

Now, in the Prologue to the "Canterbury Tales" we know that the observations could not have been recorded except at complete hours, because the construction of the metre will not admit the supposition of any parts of hours having been expressed.

We are also satisfied that there can be no mistake in the altitudes, because nothing can alter the facts, that an equality between the length of the shadow and the height of the substance can only subsist at an altitude of 45 degrees; or that an altitude of 29 degrees (more or less) is the nearest that will give the ratio of 11 to 6 between the shadow and its gnomon.

With these data we proceed to the following comparison:

Here we immediately select "X A.M." and "IV P.M." as the only two items at all approaching to similarity; while, in these the approach is so near that they differ by only a single minute of a degree...!