Notes and Queries, Number 79, May 3, 1851 A Medium of Inter-communication for Literary Men, Artists, Antiquaries, Genealogists, etc 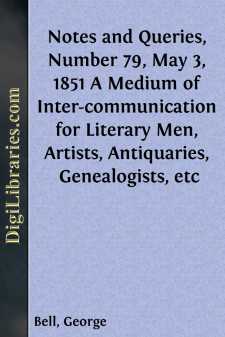 The Arke of Artificial Day.

Before proceeding, to point out the indelible marks by which Chaucer has, as it were, stereotyped the true date of the journey to Canterbury, I shall clear away another stumbling-block, still more insurmountable to Tyrwhitt than his first difficulty of the "halfe cours" in Aries, viz. the seeming inconsistency in statements (1.) and (2.) in the following lines of the prologue to the Man of Lawe's tale:—

The difficulty will be best explained in Tyrwhitt's own words:—

"Unfortunately, however, this description, though seemingly intended to be so accurate, will neither enable us to conclude with the MSS. that it was 'ten of the clock,' nor to fix upon any other hour; as the two circumstances just mentioned are not found to coincide in any part of the 28th, or of any other day of April, in this climate."—Introductory Discourse, § xiv.

In a foot-note, Tyrwhitt further enters into a calculation to show that, on the 28th of April, the fourth part of the day and half an hour and more (even with the liberal allowance of a quarter of an hour to the indefinite phrase 'and more') would have been completed by nine o'clock A.M. at the latest, and therefore at least an hour too soon for coincidence with (2.).

Now one would think that Tyrwhitt, when he found his author relating facts, "seemingly intended to be so accurate," would have endeavoured to discover whether there might not be some hidden meaning in them, the explaining of which might make that consistent, which, at first, was apparently the reverse.

Had he investigated with such a spirit, he must have discovered that the expression "arke of the artificial day" could not, in this instance, receive its obvious and usual meaning, of the horary duration from sunrise to sunset—

And for this simple reason: That such a meaning would presuppose a knowledge of the hour—of the very thing in request—and which was about to be discovered by "our hoste," who "toke his wit" from the sun's altitude for the purpose! But he knew already that the fourth part of the day IN TIME had elapsed, he must necessarily have also known what that time was, without the necessity of calculating it!

Now, Chaucer, whose choice of expression on scientific subjects is often singularly exact, says, "Our hoste saw that the sonne," &c.; he must therefore have been referring to some visible situation: because, afterwards, when the time of day has been obtained from calculation, the phrase changes to "gan conclude" that it was ten of the clock....