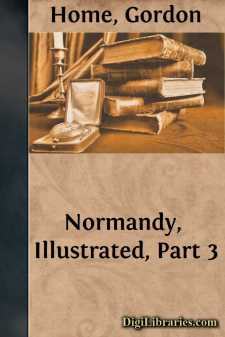 So, when their feet were planted on the plainThat broaden'd toward the base of Camelot,Far off they saw the silver-misty mornRolling her smoke about the Royal mount,That rose between the forest and the field.At times the summit of the high city flash'd;At times the spires and turrets half-way downPricked through the mist; at times the great gate shoneOnly, that open'd on the field below:Anon, the whole fair city disappeared.

"The majestic splendour of this gulf, its strategetic importance, have at all times attracted the attention of warriors." In this quaint fashion commences the third chapter of a book upon Mont St Michel which is to be purchased in the little town. We have already had a glimpse of the splendour of the gulf from Avranches, but there are other aspects of the rock which are equally impressive. They are missed by all those who, instead of going by the picturesque and winding coast-road from Pontaubault, take the straight and dusty route nationale to Pontorson, and then turn to follow the tramway that has in recent years been extended along the causeway to the mount itself. If one can manage to make it a rather late ride along the coast-road just mentioned, many beautiful distant views of Mont St Michel, backed by sunset lights, will be an ample reward. Even on a grey and almost featureless evening, when the sea is leaden-hued, there may, perhaps, appear one of those thin crimson lines that are the last efforts of the setting sun. This often appears just behind the grey and dim rock, and the crimson is reflected in a delicate tinge upon the glistening sands. Tiny rustic villages, with churches humble and unobtrusive, and prominent calvaries, are passed one after the other. At times the farmyards seem to have taken the road into their own hands, for a stone well-head will appear almost in the roadway, and chickens, pigs, and a litter of straw have to be allowed for by those who ride or drive along this rural way. When the rock is still some distance off, the road seems to determine to take a short cut across the sands, but thinking better of it, it runs along the outer margin of the reclaimed land, and there is nothing to prevent the sea from flooding over the road at its own discretion. Once on the broad and solidly constructed causeway, the rock rapidly gathers in bulk and detail. It has, indeed, as one approaches, an almost fantastic and fairy-like outline. Then as more and more grows from the hazy mass, one sees that this remarkable place has a crowded and much embattled loneliness. Two round towers, sturdy and boldly machicolated, appear straight ahead, but oddly enough the wall between them has no opening of any sort, and the stranger is perplexed at the inhospitable curtain-wall that seems to refuse him admittance to the mediaeval delights within. It almost heightens the impression that the place belongs altogether to dreamland, for in that shadowy world all that is most desirable is so often beyond the reach of the dreamer....