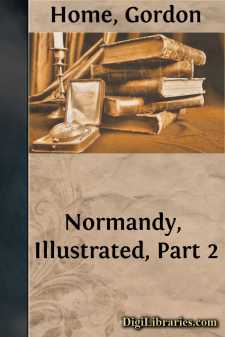 The tolling of the deep-toned bourdon in the cathedral tower reverberates over the old town of Evreux as we pass along the cobbled streets. There is a yellow evening light overhead, and the painted stucco walls of the houses reflect the soft, glowing colour of the west. In the courtyard of the Hotel du Grand Cerf, too, every thing is bathed in this beautiful light and the double line of closely trimmed laurels has not yet been deserted by the golden flood. But Evreux does not really require a fine evening to make it attractive, although there is no town in existence that is not improved under such conditions. With the magnificent cathedral, the belfry, the Norman church of St Taurin and the museum, besides many quaint peeps by the much sub-divided river Iton that flows through the town, there is sufficient to interest one even on the dullest of dull days.

Of all the cathedral interiors in Normandy there are none that possess a finer or more perfectly proportioned nave than Evreux, and if I were asked to point out the two most impressive interiors of the churches in this division of France I should couple the cathedral at Evreux with St Ouen at Rouen.

It was our own Henry I. who having destroyed the previous building set to work to build a new one and it is his nave that we see to-day. The whole cathedral has since that time been made to reflect the changing ideals of the seven centuries that have passed. The west front belongs entirely to the Renaissance period and the north transept is in the flamboyant style of the fifteenth century so much in evidence in Normandy and so infrequent in England.

The central tower with its tall steeple now encased in scaffolding was built in 1470 by Cardinal Balue, Bishop of Evreux and inventor of the fearful wooden cages in one of which the prisoner Dubourg died at Mont St Michel.

In most of the windows there is old and richly coloured glass; those in the chancel have stronger tones, but they all transform the shafts of light into gorgeous rainbow effects which stand out in wonderful contrast to the delicate, creamy white of the stone-work. Pale blue banners are suspended in the chancel, and the groining above is coloured on each side of the bosses for a short distance, so that as one looks up the great sweep of the nave, the banners and the brilliant fifteenth century glass appear as vivid patches of colour beyond the uniform, creamy grey on either side. The Norman towers at the west end of the cathedral are completely hidden in the mask of classical work planted on top of the older stone-work in the sixteenth century, and more recent restoration has altered some of the other features of the exterior. At the present day the process of restoration still goes on, but the faults of our grandfathers fortunately are not repeated.

Leaving the Place Parvis by the Rue de l'Horloge you come to the great open space in front of the Hotel de Ville and the theatre with the museum on the right, in which there are several Roman remains discovered at Vieil-Evreux, among them being a bronze statue of Jupiter Stator. On the opposite side of the Place stands the beautiful town belfry built at the end of the fifteenth century. There was an earlier one before that time, but I do not know whether it had been destroyed during the wars with the English, or whether the people of Evreux merely raised the present graceful tower in place of the older one with a view to beautifying the town. The bell, which was cast in 1406 may have hung in the former structure, and there is some fascination in hearing its notes when one realises how these same sound waves have fallen on the ears of the long procession of players who have performed their parts within its hearing. A branch of the Iton runs past the foot of the tower in canal fashion; it is backed by old houses and crossed by many a bridge, and helps to build up a suitable foreground to the beautiful old belfry, which seems to look across to the brand new Hotel de Ville with an injured expression....